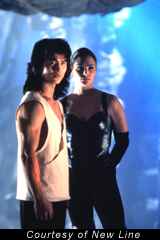 Fighter games, by their very nature, are short on plot and long on action. A Character (you, in other words) is magically whisked from one flashy arena to the next, where you must hit an opponent until he/she stops moving. Repeat. So in one sense, many of this movie’s critics are correct: it is slavishly faithful to its source material in terms of structure and style. END_OF_DOCUMENT_TOKEN_TO_BE_REPLACED