I’m supposed to warn you away from early-90s [Famous Person’s Name] [Semicolon] [Actual Title] films, but I’m pretty sweet on this one. It’s no Mary Shelley’s Frankenstein, but New Nightmare is something we hadn’t seen for quite some time by 1994: a decent Wes Craven film.

(And yes, though I’ll continue to call it New Nightmare for brevity’s sake, I’ll be filing this under “W”). As a member of the Home Video generation, I’m culturally obligated to mention the Craven movies most people (including Craven, it seems) would just as soon forget. People like Shocker and if I tilt my head and squint, I can see that. People like The People Under the Stairs and, hey, why not? But by the mid-90s, a sizable minority of horror fans had begun to vocalize The Unthinkable: maybe Craven just got lucky. Twice. Three times if you stretch. Maybe he’d never been the Master of Horror everyone wanted to believe. Or maybe, like George Lucus, he’d just spent too much time inside The Hollywood Bubble, constantly hearing people tell him how much of a Master of Horror he was/is/will forever be. END_OF_DOCUMENT_TOKEN_TO_BE_REPLACED

END_OF_DOCUMENT_TOKEN_TO_BE_REPLACED

In spite of the 1988 Writer’s Strike, shoddy direction, and Fred Kreuger’s dual role as both an immortal dream monster and a lame stand-up comedian, Nightmare on Elm Street 4 managed to become the most successful film in the franchise…up to that time.

It’s easy to see why. The financial successes of Parts 2 and 3 led to the most interesting phenomenon in the Slasher movie’s short history. Hard as it is for genre fans to pronounce this word without retching, Slasher movies became…ugh…mainstream. It took ten years, but these Old Testament morality plays disguised as exploitative gore fests went from urban, independent theaters to multiplexes across the U.S. and around the world. Both Friday the 13th and Nightmare on Elm Street fielded successful TV series and horror merchandising started to ramp up to levels it hadn’t achieved since the ’50s.

Nowadays we can look back and see the sub-genre’s slow motion death, but 1989 was actually a rare year for the cosmopolitan horror fan who’d yet to turn their nose up at the Slasher movie. That was the year all three of the “name” Slasher franchises pushed out crap sequels. In fact, that summer saw a stupefying succession of sequels, with Indiana Jones and the Last Crusade leading the pack. Star Trek V, Ghostbusters II, Karate Kid Part III, they all followed in an attempt to derail a little Warner Brothers picture everyone had heard about that was supposed to be half-decent, called Batman.

How could Freddy hope to stand against all that? The short answer is: he didn’t. END_OF_DOCUMENT_TOKEN_TO_BE_REPLACED

Except this one. While researching this review, I found an inordinate number of folks willing to give Nightmare on Elm Street 4 a pass. Not just for the usual, “It’s a Slasher movie, whaddaya expect?” bullshit reasons, but for their own reasons, varied as the person itself. Too bad I’ve always hated this movie. And now that I know why. I know this movie and I were destined to be enemies from the start. Say what you want about New Nightmare or Freddy’s Dead. For me, coming off the high-highs of Dream Warriors, this movie became the lowest of the series many lows. END_OF_DOCUMENT_TOKEN_TO_BE_REPLACED 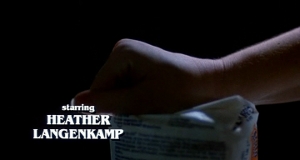 The first Nightmare on Elm Street is one of those remarkably few Slasher films where tacking on a cliffhanger ending actually worked. It felt like a thematically appropriate way to end that story because, as Tommy Wallace said to Laurie Strode all those years ago, “You can’t kill the bogeyman.” And what else is Fred Krueger?

The makers of Freddy’s Revenge obviously had no idea. So they just ripped-off Amityville II. Because what else can you do when a two million dollar picture pulls in twenty-five million at the box office? If you’re New Line, you let the writer/director responsible for everything good about the first film escape the reservation to go make The Hills Have Eyes II. The job of directing this homophobic little adventure fell to Jack Shoulder, who – to put it politely – lacks Wes Craven’s visual style. END_OF_DOCUMENT_TOKEN_TO_BE_REPLACED

The 1980s were a watershed time for American movies studios. After the protracted collapse of the old studio system in the 40s and 50s necessitated a major overhaul of Hollywood’s entire production architecture, major studios spent the 60s and 70s establishing financial relationships with independent movie producers. Previously considered the lowest form of life on Earth, a rising generation of creative types proved instead that smaller films staring no one anybody had ever heard of could make major bank. All they needed as an idea, and a group of people who believed in that idea enough to see it put on screen.

The result? Well, we can see the result on any video store shelf: oodles of low-budget, indy films, no longer made so much as distributed by the major studios. Smaller companies, geared toward nothing but selling these pictures to theaters, sprung up like gravestones in the Crystal Lake Woods. One of them, founded in 1967 by distributors Michael Lynne and Robert Shaye, was named New Line. END_OF_DOCUMENT_TOKEN_TO_BE_REPLACED