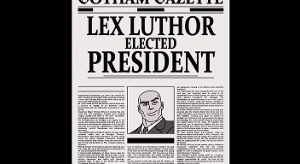 Or can you…? Here again, the Justice League TV series captured my heart by daring to actually ask this question several times to continually ass-kicking effect, only chickening out when it looked like their show might be canceled, necessitating the Climactic Battle restore the status quo. I’ve waited three years for a cartoon that dares to look into the actual nuts and bolts of superheroing during the Luthor Administration. All I can say is, I’m still waiting. In the meantime, at least we’ve got Public Enemies. END_OF_DOCUMENT_TOKEN_TO_BE_REPLACED