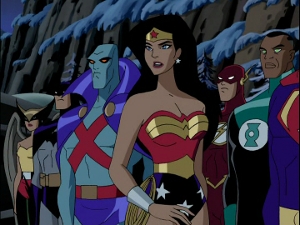 With the success The Batman/Superman Adventures in the late ’90s, and the continued dumbing down of Batman Beyond, the production team of Rich Fogel, Bruce Timm, and Paul Dini set to do the Next Logical Thing: get the fuck off the WB (sure didn’t do Buffy any harm) and throw wide the golden gates of their superhero universe. After all, if two heroes could make such a splash in the admittedly-small pond of American-produced superhero animation, think of what seven might do for the network lucky enough to carry it? END_OF_DOCUMENT_TOKEN_TO_BE_REPLACED

This is more than a good movie: it’s the movie I watch at least once a year to remind myself why I watch movies. Produced by the same writers, directors, composers and cast as Batman: The Animated Series, Mask of the Phantasm is not only the best superhero movie of the 1990s, its easily the gold standard by which to judge all subsequent  superhero films.

Shame the thing isn’t better-known outside of the fan community. It’s unique among superhero movies of its age, both for its faithful importation of material already present in Batman comics and for its deft incorporation of new story elements that add depth and meaning to the source, reinforcing key themes without hitting the audience in the face with some overriding Message or a lot of heavy Exposition. Arguably the most mature American cartoon feature to date, it deals with grand questions of fate, free will and the psychological cost of living in the shadow of one’s past. Plus…it’s frickin’ Batman. Honestly, what’s not to love? END_OF_DOCUMENT_TOKEN_TO_BE_REPLACED