END_OF_DOCUMENT_TOKEN_TO_BE_REPLACED

The first episode of The Series named after a genre in-joke begins with a stereotypical New England sea captain (complete with a little anchor on his hat) nervously checking his watch.

Far, far, far below, Drs. Prolorne, Hoffman, and Sopler explore the mysteriously-pulsating alien starship they’ve found lodged in the Atlantic seabed. “Radio carbon dating confirms my hypothesis,” Prolorne tells us. “This ship is over ten thousand years old.” Unfortunately, the ship’s security systems (which come complete with pink, wriggling tentacles that seize our Scientists and drag them, screaming, into the darkness, as if they were Japanese schoolgirls) remain functional. END_OF_DOCUMENT_TOKEN_TO_BE_REPLACED 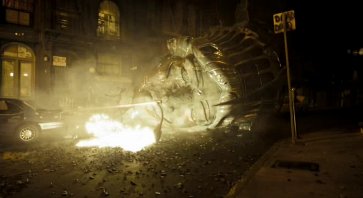 “Probably,” hell. This is one of those movies where you can almost hear the producer making his pitch over the first reel, no commentary track required: “Okay…it’s Godzilla meets The Blair Witch Project…with creepy bugs thrown in for good measure. And I’ll do it all for under twenty-five million. I’m telling you, we can’t lose.” Unlike the film’s characters. END_OF_DOCUMENT_TOKEN_TO_BE_REPLACED