END_OF_DOCUMENT_TOKEN_TO_BE_REPLACED

Of all the U.K. comic book writers ‘ported over during the 1980s, Mark Millar stands as an all-time champion of sorts, never missing a chance to destroy the goodwill he’s managed to build up with his audience. Kick-Ass, the book, is a perfect example of this, as well as everything wrong with modern comics in general and Millar’s comics in particular. A cynical, revisionist nightmare disguised as a superhero story, starring yet another morosely-unsympathetic protagonist who sublimates his own misanthropy, misogyny, and angst by dressing up in a silly costume and beating others bloody.

The twist? In the case, Our Hero is himself repeatedly beaten bloody, sent through physical, emotional, and psychological tortures most comic book writers reserve for their female supporting characters (before dutifully stuffing them into refrigerators). END_OF_DOCUMENT_TOKEN_TO_BE_REPLACED 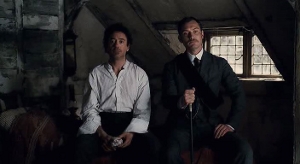 Both of these readings are false, the product of a false consciousness that lets actors and directors walk away with all the credit or the blame. This ignores the real lesson Arthur Conan Doyle’s stories teach because it has to do with plot…and if that were important we’d all be watching smarter films (instead of, say, Iron Man 2). All of Doyle’s stories are wound Swiss watches of plotting, simultaneously illustrating and espousing upon Sherlock Holmes’ vaunted methods of Reasoning. Tonight, then, let us assay this Sherlock Holmes‘ plot, in the hope of understand why this film managed to disappoint almost everyone who saw it. END_OF_DOCUMENT_TOKEN_TO_BE_REPLACED