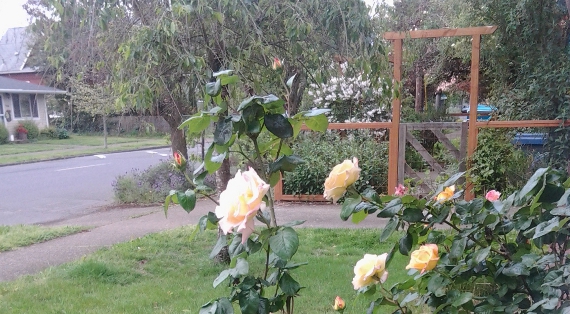 We’ve got real estate speculators, both local and national, driving home prices through the roof, the rent really is too damn high, and there aren’t enough jobs to go around. No surprise, we’ve got a homelessness crisis. We’ve had one for years, but the Current Crisis only became a “crisis” when our current mayor told the cops to stop jailing people for camping on the sidewalk. The city’s gray bar hotel is already packed beyond capacity (once again, as it has been for years), and the County doesn’t want our over-spill. No one does. Most would rather the homeless just die quietly, somewhere no one has to watch, and if they could avoid contaminating the water any more than it already is on the way out, that would be just swell. So massive camps have started forming on city-owned property, triggering absolutely nothing but sane, compassionate responses from the local middle class. (Random-but-actual quote from my city’s major daily newspaper’s website: “You have to get tough on the homelessness problem or we will all end up paying for for some lazy drug addict/alcoholic, non motivated individual’s private room somewhere, where they can party on our dime, because they don’t want to get sober and work.” Time it took to find that quote: thirty-five seconds, including the time it took to Google that article.)

As everywhere, the homelessness crisis is also a joblessness crisis. We can’t all commute to the Silicon Forest, no matter how much its boosters would like to believe otherwise. Nike doesn’t need or want us (except, perhaps, as janitors), Adobe burns through people like they’re made of dry grass, and as for Google…oh, yes, they’ve done San Francisco nothing but favors. Toxic gas and heavy metals are leaking from our old industrial remnants. Our Longshoremen spend most of their days idle, and our river/main port is still a Superfund site.

Meanwhile, our cops have such a bad habit of shooting people that even the U.S. Department of Justice [sic], well-known bastion of pacifism that it is, has straight-up told them, “You guys might want to do a few things to clean up your image.” To which they’ve responded with the bureaucratic equivalent of belly laughter. And the most audacious form of contempt available: pleading poverty and asking for a raise. After all, they lost six whole people to other cities this year alone. Criminals aren’t going to shoot themselves. (This is one of many reasons why I can’t take the conflict in Captain America: Civil War seriously.) Don’t even bother thinking about the two thousand un-tested rape kids gathering dust in the evidence locker downtown. Or the fact this isn’t the first time someone’s checked down there and wondered, “Did we ever send any of these to the lab?” The person who was Chief of Police the last time something like this came to light swears he wrote a memo about it, back in 2001 or so…but, really, it was so long ago, who can remember such details?

Our sitting mayor declined to run for re-election this year, so we’ve got a fifteen-way race for the Big Chair with The Future of Portland on the line, as always. All city positions are nominally non-partisan, but that’s little more than a giant pretense. This is one of the bluest parts of one of the Blueest States in the nation – exactly the kind of one-party state my Republican friends (both of ’em) have nightmares about. As a refugee from one of the reddest Red States (the one that birthed John Ashcroft, elected him governor, and almost made the same mistake twice), I sympathize. Seeing how many down-ballot Democrats are running unopposed makes my spider-sense scream at me, too. It doesn’t feel any better than it did in 2002, when I faced a solid wall of unopposed Republicans, because the results are always the same, no matter the party affiliation. With no competition to speak of, the statewide party can be exactly the kind of close-faced, country club boondoggle farm campaign contributors love. That’s why both my senators and my representative are going hard for the Trans-Pacific Partnership, why we’re about to build another bridge between us and Washington state, and we’ll be getting three new downtown skyscrapers, all of ’em full of condos, before the decade’s out, no matter how today’s vote goes.

Using the blank lines under each statewide candidate’s name, I find enough space to write, “I Refuse. To Vote. For Anyone. Running Unopposed.” down the center column, and “This. Is Not. A Banana Republic. Not Yet.” down the right-hand. Call it a protest vote. Or wishful thinking. Or both. Because it’s both.

As far as our clusterfuck of a mayor’s race goes, I voted for the cafe owner, because she’s called for things I actually want to see. Like a rent freeze, making downtown car-free before someone else gets dies, and maybe not giving the police union a sloppy tongue kiss every time they ask. Plus her cafe is literally right down the street from me. I could go there right now if I wanted and Support Local Business.

Combined with the fact our presidential race has been Already Decided since last summer and we’re left with the general sense that nothing we do, say, or think really matters. Such is life on the West Side of our thoroughly-managed democracy. For whatever it’s worth, you and I still know this is the best side.