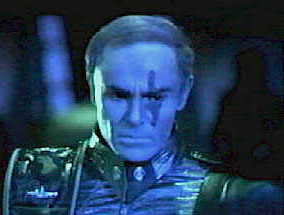 “This was the most expensive production I had financed. I always liked science fiction and my idea was to do something with the feeling of Star Wars. What I came up with was The Seven Samurai in Outer Space….” Mr. Corman goes on to mention some of the hot young talent he was able to put behind the camera. John Brother From Another Planet Sayles penned the script. Gale “don’t you dare call me Cameron” Anne Hurd scared up all the money (and proved so good at it she would go on to make a career as one of top bean-counters in Hollywood). James Horner scored up this mother. And a young Canadian pup named Jim Cameron would emerge from the bowls of the art department to become effects cameraman and chief model builder.

In twenty-five words or less: this movie was a proving ground for some very talented people. It was a necessary step for some, a full-blow launch pad for others. Without Battle Beyond the Stars, the cinematic landscape would probably look quite different today. Which is still no excuse. No, it’s no excuse at all.

So welcome one and all to the planet Akir, a useless little mud ball in a galaxy far, far away. Peace loving and isolated, the Akira (as they’re known) have grown into a society of pacifist artisans, all but begging to be beaten up by the nearest galactic bully.

Enter Sador (John Saxon with a red blotch over his left eye), galactic bully and universal heel, who seems to make a living off of shaking down backward planets like Akir…and vaporizing any who fail to pony up the goods. We open on his ship, with its crew of facially deformed cannon fodder, as Sador drools over Akir and the riches he seems to think it will bring.

The citizenry of Akir are all-but paralyzed as Sador’s ship descends right through the atmosphere (seeming to scrap the tops of the matte painter, buildings) and the overblown pirate makes his demands. Akir’s local harvest will go to feed his colony. He will return for it in “seven risings of your red giant” (however long that might be). If it is not surrendered, he will turn Akir to ash with his Stellar Converter, which, it goes without saying is “the most powerful weapon in the universe.”

The leadership of Akir (such as it is) quickly dissolves into fatalism, but a few voices (the leadership is apparently made up of seven people, including Our Hero) dissent, suggesting that mercenaries be hired to fight off Sador and his One Ship. But who will go out and find those mercenaries, you ask? 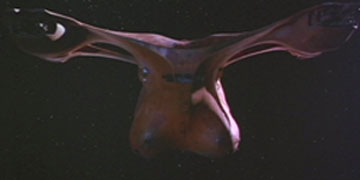 Why not send a whinny farm boy with dreams of flying through the stars? Worked great for those folks over on Tatooine. Meet Shad (Richard Thomas), Our Hero, and his talking ship, Nell (voice by Lynn Carlin, executive producer’s wife, design by Larry Flint). After all, it’s the 80s. Can’t have a movie without at least onewise cracking inanimate object. Right?

So off they go to nearest “wretched hive of scum and villainy”….just have to check in with dad’s old friend, Dr. Hephaestus (Sam Jaffe). Maybe the old coot knows where to find some vicious killers.

Turns out Dr. Hephaestus has gone a little crazy in his old age…seeing that he’s now just a head attached to a computer core. His daughter Nanelia (Darlanne Fluegel) seems organic enough, though, and with a little coaxing she joins Shad on what her father considers to be a foolish quest.

Next Our Hero stumble upon a “hauler” being attacked by space pirates. Shad (after some melodramatic indecision…what is this, the Red Badge of Courage) overcomes his pacifist upbringing and learns how to kill like a man, so that’s nice. The “hauler’s” pilot turns out to be a human named Cowboy (George Peppard)…a space redneck with the Alabama State Flag pained across the port bow of his ship…and that’s not so nice. His drunken good nature is supposed to be endearing and, ultimately, isn’t.

Here we see a test of Sador’s power as the planet Umateel politely declines his demands. The power of the Stellar Converter quickly incinerates Umateel…or turns it into a star…or something. No one seems too fired up to offer an explanation.(Probably due to the fact that any explanation would inevitably be full of SUV sized holes. Call that one “prudence” then.

With Cowboy on board (and his cargo of hand weapons), Shad moves on…and is zapped off his ship by Nestor (Earl Boen, and several others), the one interesting concept in this whole strange affair. A creature with one consciousness spread throughout a species worth of bodies, Nestor agrees to join with Shad in order to relieve the crushing boredom of his (their) shared existence. At least for awhile.

Then there’s Gelt (Robert Vaughn), the Cold Blooded Killer, only a half-step away from his archetypal roots in post-War, Japanese Samurai movies. Mr. Gelt settles disputes, don’t you know…for anyone who’ll pay the price. Years of this have made him the most hunted man in the galaxy. He joins for the promise of food and a goodnight’s sleep.

Then there’s the Lizard”:his name is Cayman (Morgan Woodward), and he’s after Sador…for some reason or another.

And rounding out the Seven we have Saint-Exmin of the Valkyrie (Sybil Danning), the obligatory cast off from a Warrior Society. Initially snubbed by Shad, she quickly reveals her function and begins to teach Nanelia about the joys of S-E-X.

Will this plucky band transform the helpless Hippies of Akir into a reasonable self-defense force? Will they go on to return peace and justice to the galaxy? Will I ever get over the feeling that I should be watching other, better movies? Will any of you?

That’s the final hurtle for this, as it was for a slew of other Corman pictures…and it’s this hurtle Battle Beyond the Stars keeps tripping over. Which is not to say it breezes the course.

As opposed to the Seven Samurai, which (last I heard) takes two hundred and six minutes to create masterpiece. Leave it to Roger Corman to try and do it in half the time. All the familiar tropes are here. The fair-to-maudlin special effects; the constant references to other, better movies; the unapologetic re-use of shots; and all the off-the-wall goofiness you’ve come to expect from the Master. He trains his underlings well, and a few of the smarter ones became horribly famous. Too bad you couldn’t stick a few of them in front of the camera.

How to describe this cast? Underutilized? Uninspired? Or should I just quote Chef? They seem to give their all. Honest, they do. Maybe they could ask the Wizard for some talent.

I’m not talking about the few old pros Corman threw into the mix. No, they’re as reliable as always, hitting their one-note characters without breaking a sweat. Just look at Robert Vaughn. Man isn’t even straining. Look at George Peppard, three years before The A-Team, as he tap dances on the line between Harmless and Odious comic relief. Gaze, puny mortal, at the great John Saxton; playing the villain in a Space Opera but does he turn on the ham? Hell no (well, maybe a little). Why? Because he, damn you, is a professional.

But Richard Thomas…and the comely Miss Fluegel…who decided these two could carry a scene? They couldn’t carry a scene in a leather Samsonite handcuffed to their wrists. Yet the movie spends more than enough time with them for the annoyance to really set in and start to fester.

What else? Plenty. First of all, there’s the sloppy science fiction. Shad gallivants around the galaxy (certainly not our galaxy) without a care for fuel or time. Just how long is “seven risings” anyway? Are the Akir supposed to be human? Then why do so many twentieth century human phrases keep poping up in their lexicon? Do they spend all of there time watching bad movies too? The occasional good idea (like the Nestor), feels almost stumbled upon, and is never fully developed.

Like the Varda, the Akira’s all-purpose, new age-hippie philosophy. Nell and Shad quote from the stuff at the drop of a dime, using it to justify every action on either of their parts. In fact, this seems ingrained into Akiran society, as if they are physically incapable of acting without consulting their Writ. They are, at best, ready-made victims for every galactic badass in the universe. 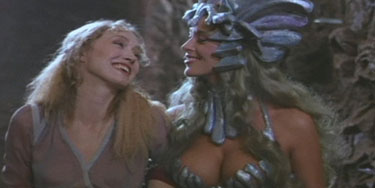 I fell an irresistible urge to write the Akir off completely…along with Battle Beyond the Stars. I’ve fallen into a bad habit recently (aside from all the smoking). I feel as if I’ve been mealy-mouthed in my criticisms, handing out free passes to lazy filmmakers and their half-hearted productions. You can only write “well, it’s not like this is a bad movie”…before the phrase just looses all meaning and starts to sound pussified.

Well, screw that. This isn’t a bad movie. But once again it peeks the interest only it fits and starts. For the most part, you’ll probably find yourself thinking of other, better films and that’s never a good sign, be your name Chosis or Corman.

Other critics will admonish you to “cut this film some slack” and “not take it too seriously.” Well, I’m sorry for them. They might be playing, but I’m not. I take my entertainment very seriously, and this movie almost entertained me. Yet it failed as a whole, and I’ll probably forget it by the time this review hits the ‘Net. Your four-year-old son might be able to hold onto it…unless he’s seen a Space Opera from the last twenty years.