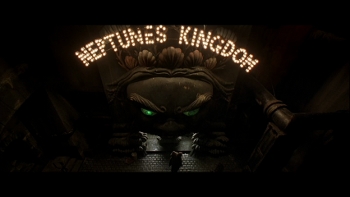 Most critics began their writeups of this film with the elementary and idiotically middle-minded question: “What if you woke up [in our main character’s situation]?” Well no surprise, me: I’d freak out, find a hole to crawl in, and stay there. As would you, fictional meta-critic I made up for this intro. But then, we’re not the protagonist of Dark City. Or are we really? And if not, then just what are we? The sum of our experiences? Take those from us and what’s left? Emotions? Sense impressions? Souls? Some interior sense of justice and injustice? Is there anything within our beings that makes us uniquely us? What is it, then? And when will some anonymous Chosen One rise from out the bewildered herd to educate us and our body-snatching, pale-faced, alien masters?

These are Dark City‘s primary questions, and its heartfelt concern for them is (poignantly, and for once) not buried under a multi-million dollar marketing campaign or a barrage of Hong Kong Action Movie tricks…unlike certain other, more popular, and much more expensive films that utilize essentially the same plot, and attempt (haphazardly, almost as an afterthought) to address the same questions. But fuck The Matrix. Much as I love it, thanks to Dark City I cannot prostrate myself before it. Buy the ticket, take the ride, and I’ve been on this ride for over a year. So good job, Wachowskis: now tell me something I don’t know. 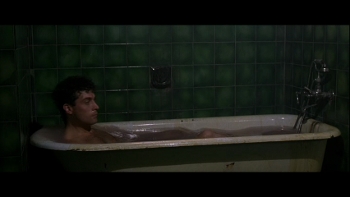 At Dark City‘s opening, we know as little as our protagonist (Rufus Sewell), who wakes in lukewarm hotel bathtub with no memory of who he is or how he came to be there. The driver’s license in his pocket says his name is John Murdoch. A mysterious phone call from Kiefer Sutherland, and the dead hooker on the floor with the Fibonacci spirals etched into her flesh, tell him some Five Alarm shit is going on. A hasty exit might be the most pragmatic course of action. We follow John’s aimless wanderings around the titular City for several scenes…until a gang of strange men in black start to chase after him. Since none among them is Will Smith, John makes the safe assumption that they must be Evil . Chopping one open reveals this to be a prudent assumption. Hell, they aren’t even human. But if the strange, telekinetic powers John manifests during this initial chase scene are any indication, Our Protagonist ain’t exactly Joe Normal either. 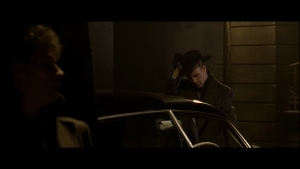 Finding his wife, John learns that not only does he have a wife named Emma (played by Jennifer Connelly – Go, you, Johnny-boy), but that she was unfaithful to him at some point in the past he can no longer recall. She also tells him of his doctor, Daniel Schreber (Kiefer Sutherland), and how a quick sit-down with Dr. Schreber might also be a good idea. John departs to assimilate this. On the one hand, she could be lying. On the other hand, infidelity can turn people into murderous madmen. But John’s not a murderer. Or is he? That dead hooker (and the string of them appearing around the City these past few nights) might be his work…or the work of those “men” he just escaped.

While all this spins through his head, time stops. Cars, trains, people; all fall like broken toys. Like a world ruled by the Fairy Godmother’s mad bitch of a sister, the entire city falls asleep at the stroke of midnight. All save John, who, in an excellent scene, revealing Sewell’s Powers of Acting, dashes about a crowded highway, shaking sleeping people out of there cars in a vain attempt to wake someone, anyone, up. Then, before he knows it, things start to change. Buildings shift and twist into new shapes. Radio towers spring up like corn stalks treated with Alec Holland’s bio-restorative formula. Apartment tenements become rich condos, and the entire city begins to swarm with those “men”. 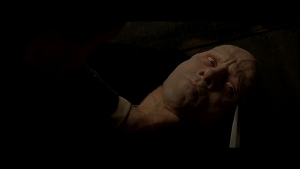 Freaked right the fuck out, John attempts to hide, and finds the good Dr. Schreber not only awake but running around with these “men”, helping them perform experiments on the City’s sleeping population. After some pummeling, Schreber explains that all this…the city, the people in it, John’s memories (or lack thereof)… is the work of what Schreber calls “the Strangers,” alien beings who use our dead as “vessels” and have the ability to alter physical matter through the telepathic machines that run under the City. Built, not on Rock-n’-Roll, but on dreams, populated by kidnapped hordes of long-forgotten origin, the City is a perfect closed system, a vast simulation. Every twelve hours the Strangers shut the whole thing down and “tune” bits of it their whim, including the memories of its ignorant inhabitants.

No one in this City has his or her original memories intact. Free will here is as much an illusion as the beach John keeps dreaming about. Human beings are the rats in this city-sized maze but John (of course) is different. Somehow, during the implantation of his newest life (as a serial-killing malcontent), John resisted, and wound up a blank slate. This, somehow, allowed him to inherit the Stranger’s ability to effect bits of the City with his mind.

Words cannot genuinely describe this film in anything other than a dry, analytical way, killing it dead as a butterfly pinned to a specimen board  in one of the Smithsonian’s drawers. Nevertheless, we must try. And a good deal of its incomunicability flows from director Alex Proyas’ highfalutin’ style. By fusing a comic book sensitivity to striking images with heavy nods toward German impressionism and film noir, Proyas works the same magic he worked in The Crow, creating a sense of urgent movement that hauls the viewer through the twists and turns of David Goyer and Lem Dobbs’ plot. 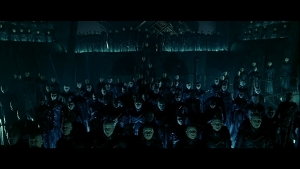 Indeed, Goyer, Dobbs and Proyas have hit upon a story that renders traditional film tropes like characterization less than useless. John Murdoch’s past is not the point of all this, despite its pulling double shifts as both a MaGuffin and a climactic reverser (sorta, kinda, spoiler alert). This in no way discourages the actors from giving their best. William Hurt, for example, is a wonderful gumshoe hot on John’s trail, who for once follows Sherlock Holmes patented method of investigation all the way to its however-improbable conclusion. Connelly, despite ending up a damsel in distress, projects a quiet strength that elevates her lady-in-waiting role to a third dimension. I even believe her tears (and Connelly does has some of the best tears in the biz), just as I believe Sewell’s desperate near-madness as he succeeds in playing the non-character main character that he is.

The point is that action which serves as the basis of all good science fiction…all good fiction, in fact…examining what, in the argon of my favorite Philip K. Dick story, “human is.” There’s a lot of Blade Runner in Dark City‘s visual aesthetic, and comparisons between the two films abound. This only shows the illiteracy of most film critics, few of whom seem to recall Dick’s final point, the essential question of the book Ridley Scott butchered to make his oh-so-pretty film: in the electric city, what keeps humanity’s head above the technological mire we’ve built for ourselves? Did we even build it in the first place?

No, says our popular culture. It’s all those damned aliens and their technological superpowers. If only we could see through their fog of lies and wake the fuck up to the really real nature of the world. Like any of us are going to do that, or use films like this as our guideposts and watchword…apart from me, that is. 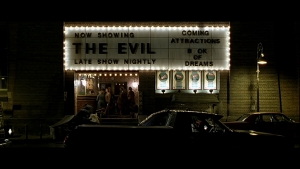 I don’t really mind the Stranger’s underdeveloped alien-ness. They look and act more-or-less like the vampires they’re meant to remind me of, yet they’re saved from being one-dimension villains by a wonderful turn from Richard O’Brien (know around these parts as Riff-Raff from The Rocky Horror Picture Show) as the aptly-named Mr. Hand. In an attempt to track John down before he wreaks the whole applecart, Mr. Hand volunteers to be imprinted with the very memories John rejected. With gleaming death in his eye, Mr. Hand sets out to ensnare humanity’s only hope with a little unwitting help from Emma and William Hurt’s character, the film’s noir-detective-alike. This bit of movie cat-and-mouse handily pads out the second act while allowing us to step behind the Stranger’s curtain of creepiness. Surprise! They’re not all that different from us, really. No more so than the Morlocks. And once again, that’s okay, because for all their advanced technology they aren’t really the point either.

That Dark City not only knows this but manages to internalize it is a miracle of modern movie making in itself. All those CGI morphs and filtered cinematography are set dressing, distraction from the film’s real thrust. In an era that plucks its hot young directors from the world of advertising (including that slickest of ads, the music video) its refreshing, enchanting, and by-God heartening to find a film with even half a mind (hence the success of The Matrix). I’m even more astonished to find a film with a mind all its own. Dark City is that film, a perfect epitome of the late-20th century conflagration of science fiction and fantasy. While the ground level fans insist on segregating them, artists are working hard in the trenches to bring about their unification. This is a speculative film that, by now, you should have all seen. Because it’s just that damned good.