In spite of the impression these movies give us here in the twenty-first century (more on this later) Japan’s scars were, at the time, still visible in hospitals across the country…nowhere more so than in the city of Hiroshima.

Before we go there, though, we have to jump back to 1945, “somewhere in Germany.” The Western and Eastern European Fronts have collapsed. German forces from all points of the compass are beginning their last, long retreat. Deep in Berlin, a stereotypical Mad Scientist is packing his bags…or, rather, his trunks. One trunk in particular attracts the attentions of the Nazis, who spirit it away to the Mad Scientist’s obvious displeasure.

A U-boat carries the mysterious trunk (Indiana Jones style) around the Horn of Africa and into the waiting arms of the Japanese Imperial Army…who, thankfully, open the trunk for us once they’ve got it stowed away at a proper research facility. Inside, we see a human heart suspended in a jar of blood…and it’s (dramatic pause) still beating (dramatic music cue). Outside, we see this research facility has the singular misfortune of being located in (you guess it) Hiroshima. Its August 6th, 1945; do you know where your horrible, fiery death-from-above is?

“Fifteen years later” (that is, in 1960) we meet Our Hero, Dr. Bowen (Nick Adams), an Obvious American on staff at Hiroshima Hospital’s Cancer Ward studying the long-term effects of radiation poisoning. Despite an evident comradeship with his colleagues, Drs.Yuzo Kawaji (Tadao Takashima) and Sueko Togami (Kumi Mizuno), Bowen begins the film contemplating a return to the States…and maybe even (gasp) a new direction in his life. It certainly beats pacing the halls in a lab coat, watching your patients drop dead one by one. Will events conspire to keep our Dr. Nick in the slim, sheltering arms of Japanese hospitality? Only time and strange events will tell.

First, a taxi has to interrupt Our Hero’s dinner by running over a child in the streets below their apartment. In true 1950s fashion, Our Heroes hide behind the drapes, not even bothering to rush down and examine the poor little bastard on the pavement. (What kind of doctors are you people? You get your degrees in the mail?) Lucky for them the child picks himself up and scampers on after Dr. Girlfriend unceremoniously flings a bag (of food?) down to him.

This garish-seeming bit of social hostility marks my break with the film. From this point on, I began to feel a growing unease about Frankenstein Conquers the World. I feared (justifiably so) that I would never really come to love this movie’s human protagonists. Worse, their callous disregard for medical ethics made me wonder if I could even like them as characters. Because in a genre like this, characters, no matter how engaging, are just going to wind up standing on a hill watching the Climactic Fight scene anyway. They might as well be likable in the meantime.

There’s not much fun involved here (unless you count the Obligatory Dance Party later on). A scene later, Our Happy Couple finds the child in a cave. Local peasants inform them that he hides there, living off whatever he can catch. Undeterred, Sueko lures the feral child back to the hospital with her powers of womanhood, temple priestess of Science that she is. 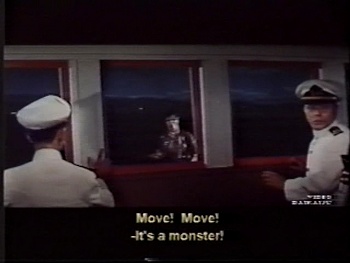 Dr. Bowen is intrigued. It seems the child has developed some natural immunity to radiation poisoning. If anything, he appears to soak up the stuff, like a sponge. And he keeps growing, a problem no one (least of all our heroes) puts any thought into until it’s far too late. And then they build the “child” a cage in what looks to be the hospital basement. Clues to his identity are scarce…though Kawaji does manage to unearth tales of a three year-old running around the ruins of a Hiroshima military hospital, sometime in August, 1945…but how could a child so young survive in such a harsh environment?

Meanwhile, along the Inland Sea, a mysterious subterranean force destroys an oil rig. Seems like mobile earthquake season’s begun again…until one of the suit-wearing oil rig bosses notices something moving inside the earth. He takes his story to Hiroshima, meeting our three doctors and leading them from A to B to C. Back during the war, our Oil Man [who’s name may or may not be Kawai (Yoshi Tsuchiya)] came across a disembodied, still-beating heart in a jar full of human blood.

That heart, we learn, was the “immortal” heart of Victor Frankenstein’s monster–seemingly indestructible and holding the key to all manner of life-changing, scientific good stuff within its fibers. It was assumed incinerated along with the rest of the city…but what if it survived? And what if, after a time, hungry hands reached down to pick it up out of the wreckage? 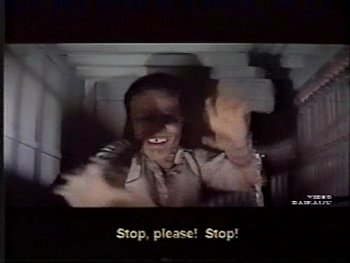 Meanwhile, Kawaji sojourns to Germany. There, another wizened Mad Scientist stereotype tells him there’s only one way to authenticate Kawaji’s so-called Frankenstein: cut off its arms and legs. If they grow back (and the severed limbs continue living, provided adequate protein) it’s a Frankenstein (‘s monster).

Oddly enough, Kawanji’s all for this plan. He only worries about mentioning it to Sueko…with good goddamn reason. Bowen’s sole contribution? Asking Sueko for her advice, allowing her to become my Hero with her almost-impassioned speech in defense of the “boy’s” human rights…such as they are…he being an orphaned non-person and all.

Dr. Kawaji, our other hero (this was specifically intended for distribution on both sides of the pond) proves himself deaf to Sueko’s conscience. Only the timely intervention of an Overzealous Reporter (and his crew) halts Kawaji’s experiment in vivisection.

Like King Kong before him, the boy-creature proves intolerant of bright lights. With every man in the room ineffectually soiling their nappies, the creatures breaks free of his cage and escapes. And with all the moral ambiguity swirling around our human protagonists, my heart goes with him. I’m once again rooting for the monster by default, he being the only character in the film about which I give a damn.

As is to be expected. The remainder of the film follows civilization’s escalating campaign of brinkmanship with “Frankenstein” (as everyone insists on calling him). In every sense, this movie’s title is a misnomer. Frankenstein – the Swiss (not German – he was from Geneva, remember?) scientist who created life out of people parts – never appears in this film. The monster that incorrectly bares his name conquers nothing and ends up (as they do so often) fleeing a civilization that fears and hates him. The “world” never extends beyond Japan of the early 1960s, an endless collection of dance parties where only super scientists, government flunkies (up to and including the military) and journalists appear to work for a living. (Aliens attempting to take over the world do occasionally seek out employment to cover their clandestine operations…but in retrospect, this often makes them more conspicuous to native opposition forces.) 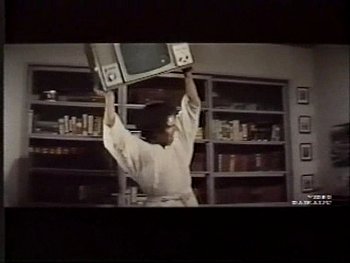 Perhaps that’s an unfair characterization (well, I know it is because I’ve studied actual history…the kind that comes in books, but never mind that now, we’re almost done here) because this Japan still harbors an un-industrialized, rural population, if only to provide the other monster in the film with someone to terrorize at will.

Baragon (and don’t ask where the name comes from) also serves the cause by uniting audience sympathy behind “Frankenstein” in time for the final fight – as if we needed any more inducement. With his destruction of oil derricks (symbols of Japan’s twentieth century future) and small mountain towns (symbols of Japan’s pre-Meji, Fantasy Past), Baragon terrorizes all of Japan, his country’s answer to the giant bugs in a Bert I. Gordon movie of comparable vintage. A cave demon, captain of the desolate, subterranean places where secrets congeal into great, moving masses and explode into the waking world, Baragon is meant as the ultimate foil. Instead, he comes off as a great bore. Both monsters lack anything approaching Godzilla’s or Gamera’s dynamism, and the movie suffers for it. With no good will toward human cast, it falls to monsters to win my love during the final act. They don’t. Like the scientists who gaze at them, they remain flat and underdeveloped, 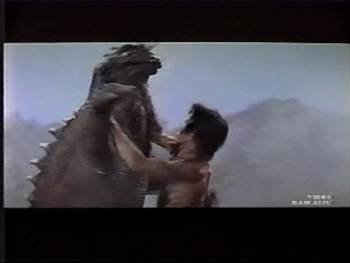 Of course the scientists assume no responsibility whatsoever for the events they unleash. When someone asks, “Do you know what happened here?” late in the film, Dr. Nick feeds him a bullshit line about the creature fighting Baragon. I’ll tell you what really happened, pal: same thing that happens in every story named Frankenstein (or the Modern Prometheus). A bunch of scientists played around with Things Better Left Unplayed-With and then refused to take responsibility for the consequences of their actions. How many criminal charges do you think the Japanese government could bring against Dr. Bowen and his intrepid Scooby Crew? How many civil suits?

Apart from that, how many times can Nick Adams contort his face into a semblance of dull surprise? Could Kawaji’s evil be any more banal? And could Sueko be a more useless girl? Couldn’t they have worked some way to have her trip, faint, and break a nail at the same time? Two out of three ain’t bad, but I mean, c’mon…

The film’s schizophrenic character flows from an uneven blending of its source material. It attempts to be both a Frankenstein and a daikaiju movie, never quite fulfilling the promise of either. This is surprising, given the clannish character of this era’s daikaiju film-making. Behind the cameras you’ll find most of the people who made King Kong vs. Godzilla not four years before. There you see a perfectly blending of apparently-incomparable material, right down to Kong grabbing the movie’s designated Chick and climbing the Diet Building. (Which actually managed to support his weight, despite – or perhaps because of – Godzilla’s frequent success at walking right through it.) It was both a King Kong and a daikaiju movie, specifically a Godzilla movie, both rewarding and defying its shared audience’s expectations.

On the other hand you have this film, which sits politely and doesn’t talk out of turn. It hits (almost) all the high notes, denying us only a climactic battle in the heart of some urban metropolis…and any real sense of closure. The movie comes complete with a lazy, built-in-franchise-maker ending fit for today’s Hollywood. Comic book fans then and now know that, unless you see a body, nobody stays dead forever. The same applies to both of tonight’s monsters…after a fashion…but that’s another story.