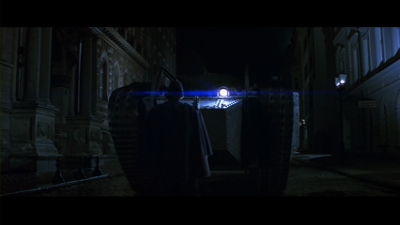 This film is a throwback to the Golden Age of superhero movies. That was not a happy time, despite my choice of verbiage. Sure, Richard Donner’s Superman led the pack, but so did those crappy, made-for-TV Captain America movies. Remember Dolph Lundgren as He-Man? Or The Punisher? Have you forgotten that the era of Tim Burton’s Batman also cursed us with Joel Schumacher’s? I haven’t!

Granted, uniting five of Victorian fiction’s most extraordinary characters under the good graces of Her Majesty’s government is one hell of an idea, a pastiche umatched by anything in the medium this side of Transmetropolitan.  A detournement of nineteenth century English fiction. The sharks smelt bloody and money half a world away. And they rent everything good and decent about this idea limb from bloody limb. Everything original, innovative, everything worthwhile about Alan Moore and Kevin O’Neil’s concept got stripped faster than an Arab in a New York airport, thrown away or reworked into a smoldering, unrecognizable pile of horseshit fit only for a London gutter, or a 20th Century Fox Executive. 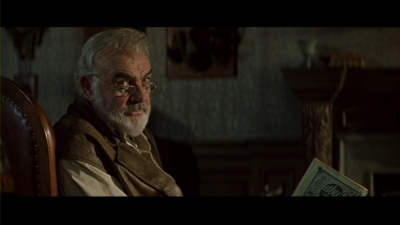 Both book and film being in the industrial waste of London, c. 1899. After the opening crawl needlessly informs us that “a new century dawns,”  we know from the matte painted backgrounds that someone (director Stephen Norrington, perhaps) has read far too much steampunk fiction. As the credits roll, a tank straight from the trenches of the Great War twenty years hence rolls right through the Bank of England. This tank is a symptom of the film’s malaise. Rather than attempt to design a coherent world (as a certain illustrator did when he brought this universe to life) with its own design sense, the filmmakers lazily utilize a slap-and-dash, half-assed approach toward their time-bending technology. You’ll see what I mean.

Right now, the tank’s German-speaking occupants need concern us, particularly the suavely-dressed one with the skull-head cane. This is our Villain, the Phantom (or “Fantom” according to the back of the DVD case – presumably to distinguish him from this one). Months and a few spinning newspaper headlines later, the Phantom and his now-English-speaking crew abduct some German scientists from Berlin. With war a’ brewin’ between the Imperial Powers, Her Majesty’s Government dispatches one Sanderson Reed (Tom Goodman-Hill) to Kenya. Reed’s mission? Recruit the legendary colonial explorer Alan Quatermain (Sean Connery) “to lead a team of unique men, like yourself, to combat this threat.”

With Connery in the lead role, I knew the moral ambivalence Moore and O’Neil brought to his character would fly right out the porthole. No opium dreams for this Alan Quatermain. Despite the usual Initial Protestations (“I’m not the man I once was…”) Connery proves as the much the action hero as ever, easily winning his gun fight against the three armor-plated assassins who invade his Kenyan retirement home with submachine guns (not invented until 1918…ten minutes in, and already they’re stretching, but at least we’re still stealing from The Great War…Reed even mentions it by name). 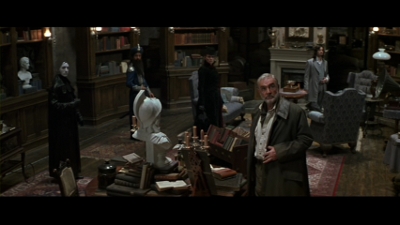 Only one of the assassins escapes Connery’s bloodthersty rampage…oh, sorry, I mean “action sequence”…leaving the usual bomb behind. As his retirement home goes up in flaming ruins we discover Alan gives all of his rifles female names, just like Columbine High School killer Eric Harris. With that creepy fact established, it’s off to London and the rest of our so-called “team.”

They assemble in the bowls of the British Museum. A mustached man who identifies himself only as M (Richard Roxburgh) introduces Alan to Captain Nemo (Naseeruddin Shah); “gentlemen thief” Rodney Skinner, an (but not the) Invisible Man (Tony Curran); the Token Woman/chemist/vampire, Willamina Harker (nee Murry, played by Peta Wilson); and the rest of the plot. Seems British Intelligence (oxymoron alert?) knows of the Phantom and believes he’s set to attack a conference of European leaders set to meet in Venice.

Except it’s 1899 and “the leaders of Europe” don’t need to meet in Venice. Or anywhere else for that matter. That was the real beauty of the nineteenth century, when you could sit back and let the inbred royals shoot wires off to each other and call it “international diplomacy.” The First World War only happened because Europe relied so much upon this Good Ol’ Boys and Girls Network, rather than on politicians and so-called “experts.” The royals were (and still are, in some cases) only human, and as such they did some stupid things…like hiring this crew of rejects, for example.

The League leaves in Captain Nemo’s (ahem) car to recruit one Dorian Gray (Stuart Townsend) at his home…where the Phantom waits in ambush. It’s too early for anyone to die so why not have Our Heroes mercilessly slaughter a whole library full of bad guys? Don’t worry, the bad guys are all decorously masked. Look a lot like ninjas with guns…which fits, since Captain Nemo seems to have turned into a Mortal Kombat character sometime after what Moore called “the Mysterious Island incident.”

The team’s aided by the surprise appearance of Agent Tom Sawyer (Shane West) of the American Secret Service (oh, puh-lease). According to the producer’s commentary that came with my disc “the studio” insisted a young American appear somewhere in this film. So we get Tom…despite the fact that Tom Sawyer, in his youth, was a raving maniac, unfit for any kind of responsibility. You wanted shit done, you called Huck Finn. Tom fucked up everything he touched for the sake of “adventure,” with dangerous (and occasionally painful) consequences for all involved. Just ask Jim.

However, since they’re both merciless killers, Tom and Quatermain bond over Tom’s Winchester rifle, and he’s in the League just like that. Speaking of merciless killing, Mina caps this little action piece by vamping out on one of the Phantom’s redshirts, necessitating an expository speech. Hot, in a disgusting kind of way…but damn it all, killing Dracula was supposed to have cured her sanguinary tendencies. Guess Mr. Stoker tacked on that happy ending to please his simpering, middle class audience…the same reason the League‘s producers tacked on Mina’s vampirism, which wasn’t no more present in the comics than Tom Fucking Sawyer. 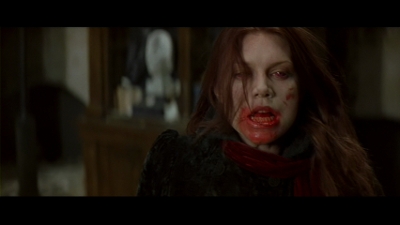 To Paris then, in Captain Nemo’s aircraft carrier-sized Nautilus (which somehow manages to slip in and out of France’s rivers completely undetected) for a Dr. Henry Jekyll…and his better half, the Hulked-out Mr. Edward Hyde (both played by Jason Flemying). With the League “set” it’s off to Venice (the Nautilus changing size as efficiently as Atom Smasher or Apache Chief) for another action sequence, some betrayal, a few predictable complications, and the usual Second Act nonsense. Sure to lead to more Third Act nonsense, some manner of ticking clock, and an enormous climactic action sequence.

Screenwriter James Robinson must’ve been somebody’s pet. His script is a long excuse for Sean Connery to mug the camera and talk about “old tigers” who “go down fighting.” Yes, Sean, you’re sure fighting to make every film worse than your last. Who thought you could top Meteor? I’m sorry, okay: I was wrong. Turns out you could do worse.

Robinson’s script is also a object lesson in what not to do, both in a superhero movie and a historical pastiche. It rightly remains his only feature script to date. Pray things stay that way. Every bit of dialogue is a club, bludgeoning us into submission. Monologues abound, doing the heavy lifting of story and character development. The few references to Victoriana that survived the movie making process are as heavy-handed as everything else that comes out of these character’s mouths. (“Not as fast as Phileas Fogg. Around the world in eighty days?”) All of which serve as excuses to get us to the action tropes. They’re all here: gratuitous gunfights, slow-motion explosions, Hero’s Battle-Death Exemptions, even a one-car car chase. It’s an example of video game writing, hamstringing the film’s pace by its constant need to drop everything and kill a whole bunch of someones every fifteen or so minutes.

Connery is the same Sean he’s been since Rising Sun, secure in the knowledge that he can do whatever he wants and director Norrington will let him get away with it. The Blade veteran goes out of his way catch Sean swaggering in almost every scene. The Captain America of his little band, Connery’s Quatermain hobbles every other actor on screen by virtue of who he is, a living gravity well. Caught up in it, helpless as a starship without the Federation’s powers of technobable, the other actors flail about under the mistaken impression that this is an ensemble piece. 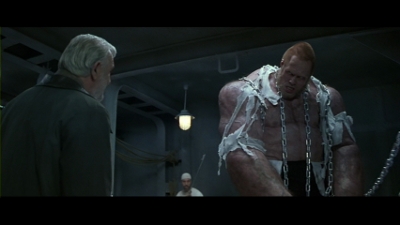 Too bad their characters are defined solely by superpowers. Forget the demon-haunted, self-interested individuals we fell in love with in the comics. Instead, enjoy the sight of second-string actors animating their (somewhat mutilated) cardboard replicas. I enjoyed Peta Wilson’s Mina despite the fact she is the most radically-altered character here. She plays recently-deceased well and never once looks (unlike, say, West) uncomfortable, despite the steampunky bondage outfits she’s poured into. West’s Tom is a trigger-happy American, constantly chastised by Quatermain for his wasteful shooting sprees. That’s all. Flemying’s Jekyll is too sure of himself, and his Hyde is far too noble, never once threatening to eat anyone’s head. Despite the quiet dignity he brings to the role, Shah’s Nemo also suffers from an excess of compassion. Altruists don’t ride around in submarines calling themselves “No-one.”

Curran’s Invisible Man makes Kevin Bacon look like Claude Rains, little more than Odious Comic Relief. Instead of a murderous mad scientist we get the Invisible R.J. Raffles. Rights issues prevented the filmmakers from using H. G. Wells original character, the mad Dr. Jack Griffin, and this alone should’ve spiked the film, but oh no: someone (who’s name appears above the credits) wanted to start a franchise.

This is why we hate Hollywood: they don’t give a shit about stories, creative or otherwise. That’s why this film is the poorly-paced, paint-by-numbers mess. No one involved thought to ask, If you’re going to make a League film, why not bother to make it well, and faithfully? If you don’t want to do that, why not go off and make your own damn cast of public domain characters? Send them spinning through the Action Movie Plot wheel for all I care, just don’t wrap shit up in a good name and try to pass it off as chocolate. There are good reasons why this film barely made back its budget, good reasons why Sean Connery and Stephen Norrington retired, and good reasons to wipe Los Angeles off the map. You’ll find all this and more in League of Extraordinary Gentlemen.

Now, where are those damn aliens? Let’s just hope they get here before the sequel gets off the ground. 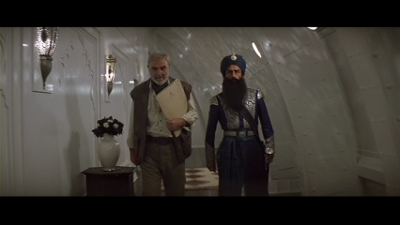 One thought on “The League of Extraordinary Gentlemen (2003)”