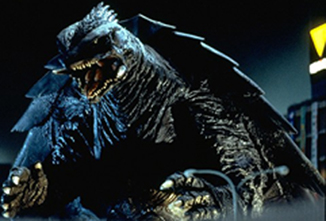 It was easy to pick on Gamera. It was fun. Not so easy any more. Because Gamera has become the pinnacle. The new high water mark in giant monster cinema. In Gamera 3, the wave broke, just in time for the Millennium. Remember when the world ended? Yeah, so do I. Remember how seriously we all took that? As if it actually mattered? Well, imagine how it felt to our Japanese brothers and sisters. There’s a palatable sense of impending doom throughout Gamera 3, adding weight and drama to the proceedings and turning this story (and its giant turtle protagonist) into more than the sum of their rubbery parts.

Before the credit sequence (with its fiery font and swelling music), there’s some choice scenes of death to set the tone. It’s been three years since Gamera’s, and humanity’s, battle against the Legion. Gyaos (the asexual, man-eating “birds” from Guardian of the Universe) are appearing all over the globe, eating whomever they catch. Meanwhile, off Japan’s southern coast, an unmanned survey vehicle stumbles across an underwater graveyard, full of decaying turtle shells the size of public housing projects from the sixties. Then there are those weird comma beads, which facilitated Gamera’s psychokinetic link to humanity. Since the top turtle’s resurrection in Sendai, they’ve gone the way of the Billy Crystal’s career, crumbling to nothingness.

Cut to Ayana (Ai Maeda), who’s living with her aunt and uncle in a little po-dunk mountain town. Ayana used to live in Tokyo with her parents…until Gamera and Gyaos turned the city into a war zone in their 1995 clash. Four years later and the poor girl’s still having nightmares, complete with a hollow-eyed, nightmarish vision of Gamera sure to make every Kenny from here to Sapporo wet his pants. (Do I even need to point out the resemblance between this nightmare-Gamera and the Godzilla of Godzilla, Mothra, and King Ghidorah: Giant Monster All-Out Attack? Didn’t think so.)

One day, in order to stop the local clique of vicious middle-school girls from teasing her younger brother, Ayana takes a dare and sneaks into the old shrine on the outskirts of town, intent on stealing a sacred stone (which bares a more than passing resemblance to a turtle shell). Young Bruce Lee look-alike Moribe, whose family has guarded the shrine for generations, breaks up this little scene, warning Ayana against messing with such ancient things. According to family legend, stone and shrine hold back an evil spirit. Something that, if set free, will destroy the world.

As if things werent bad enough. Dr. (?) Nagamine (Shinobu Nakayam), ornithologist cum Gyaos hunter extraordinaire, is quite concerned with the “birds” sudden reappearance. She’s convinced action must be taken before the Gyaos return to Japan. Well that she should be. Just as the Monster Damage Control Committee sits down to discuss things, two medium-sized Gyaos appear in the skies over Shibuya, with Gamera in hot pursuit. The three monsters engage in a short-but-brutal firefight. A crowd of Friday night shoppers gets caught in the middle, and the final death tolls range from fifteen to twenty thousand. In the aftermath, Gamera (who, in another life, was a friend to all children) becomes number one with a bullet on the government’s Shit List. No surprise there.

Galvanized by this tragedy, Ayana returns to the Moribe’s shrine, convinced that the “evil spirit” is in fact an ancient guardian, responsible for defending Japan from an enemy who comes out of the South…like, say, Gamera. Instead she finds a strange, glowing bead…and a newly-hatched squid-like monster, which she names “Iris” after her long-lost cat. (Did Gamera accidentally vaporize it, too?)

Moribe is, as you’d suspect, quite perturbed by this development. Yet Ayana remains fixated on her plan to use the creature to avenge herself of Gamera. It’s no real surprise when Iris encases Ayana in a glowing cocoon and attempts to bond with her nervous system. (No tentacle rape as such, thank God. Bad enough when that’s animated.) Even less of a surprise when (once Moribe rescues Ayana) the now much-larger Iris begins roaming the country-side, searching for other victims. Soon the cuddly little squid becomes a Gamera-sized city=smasher, intent on finding Ayana and using her as a human battery.

Soon, Nagamine, former-Gamera link Asagi Kusanagi (Ayako Fujitani), and former Assistant Inspector Osako (Yukijiro Hotaru) are all hot on the trail, with everyone joining together for the final kaiju big-battle in the rain-soaked streets of Kyoto. It’s like a tributary system, with all the loose streams of the series flowing into one cohesive whole. You get a sense of satisfaction from Gamera 3, the kind you get when you stare into the back of a Swiss watch. It’s all coming together, and thanks to the sense of doom, there’s a feeling that things just might not work out for the best. Gamera’s always been the dark horse in any giant monster race, and that’s been a subtext running through the whole series. Makes this picture just that much better.

Truly a fine turn from all involved, with special mention going to all the actors, who are inevitably mentioned last in other people’s reviews. The curse of co-staring beside a giant monster. All the series regulars return for another go, providing just the kind of continuity that’s so sorely missed in daikaiju movies. What’s more, screenwriter Kazunori Ito once again goes the extra mile to give these characters a stake in the giant monster battles. No gawking at TV screens for these puny humans. They have permission to help shape their own fates.

Special props to Ai Maeda, the closest thing to a human antagonist in the whole trilogy, who carries much of the movie’s dramatic weight on her shoulders. She proves just as apt as Ayako Fujitani was at communicating her personal stake in all this through labored breathing and intense stares. Heck, she even gets to come full circle by movie’s end, as events move to challenge her “Gamera = Bad” position. Ayako (age 20 at the time of filming) once again proves that she can out-act her father by a mile…even when she isn’t the main star. She has a clear part to play here, along with some crucial plot information. Not to mention she’s the only one in the world who even vaguely understands what Ayana is going through. Fujitani’s Asagi is a young woman who knows in her heart-of-hearts that “Gamera = Good,” and even when things look their darkest she does all she can.

On to Shinobu Nakayama, sorely missed from Gamera 2, and back in form as Nagamine. Her character harkens back to the “first to go, last to know” scientists of the Daikaiju genre’s Golden Age, who were forever traipsing around looking for clues to the monster’s nature. We spend the most time with her during this outing, and I was surprised by how normal her life is otherwise. She goes to meetings, hangs out with friends (who all happen to be nerds, like her) and forgets to call her parents. This initial normalcy (played against scenes of Ayana’s small town life) adds a lot of life to the Gamera universe, making the giant turtle and his foes that much easier to accept.

That’s a perfect lead in, but I’m going to ignore it for now. I’d rather talk about Yukijiro Hotaru and the character of Osako. You might have noticed him as the Odious Comic Relief in Guardian of the Universe. He had a bit part in G2 as a Kirin Beer factor security guard who’s factory is raided by an army of Legion drones. We catch up to him here as a bum on the streets of Tokyo, hawking newspapers for booze money. Then Gamera and Gyaos descend from the sky and everything goes to hell. Nagamine finds him among the survivor’s camps and ask him to join her Iris hunt. Fed up with running away from trouble, the former police inspector accepts, going on to play a part in the final showdown.

Not the most complex of arcs, but once again Ito goes for the hat trick, taking this character (one of the most peripheral in all three films) to a place that is both satisfying and believable. Hotaru has never blinked once through his character’s many ups and downs. I didn’t mention him much in Guardian, because (like so many) I dismissed him. I’d just like to apologize for that oversight. The man does great work, and, as the bards said, “you better recon’ize, fo’.”

But enough about all that. What about the monsters?

Well, there’s Gamera, for one, who’s new upgrade is a thing of beauty. Gone is any semblance of his 1960s self. Tusks jut out from a mouth full of teeth. His fireballs are numerous and destructive. His shell is a shape-changing shield of overlapping armor. This is Gamera as he always should have looked, brought to life by a smooth combination of suitmation and strategic CGI. The fusion is seamless and dynamic, with Gamera maintaining a level of believability I wouldn’t have thought possible ten years ago. As send-offs go, the old turtle could not have asked for better.

The Anti-Gamera, Iris, fulfills its (his?) role to the letter. Fluid instead of awkward; sharp instead of blunt; Iris is the most visually interesting giant monster since Gigan…and come to think of it, the two have a lot in common. Both have a single eye and edged appendages. But while Gigan is a child of 1970s design sense, Iris is very much the child of today, alien in an Lovecraftian, cephalopodic way. As vicious and reptilian as Gamera appears, at least he still resembles a creature from this planet. I hope who ever came up with Iris’ final design (that would be creature designer Mahiro Maeda) earned themselves a box of cookies.

Indeed, cookies all around. Especially for director Shusuke Kaneko and SFX director Shinji Higuchi. These two (along with Ito) have reset the standard, simultaneously returning the genre to its roots and dragged it (kicking and roaring) into the twenty-first century. As Gamera and Iris faced each other across a burning Kyoto landscape, I sat back and thought, My God, it doesn’t get any better than this. If you’re anything like me, you’ll feel the same…and who knows? You might even convert an errant friend or two to the fold with this saga of a misunderstood flying turtle who saves the world for us all. So far, there’s no better way I know.