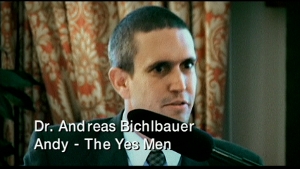 One publicity consumer, the proprietor of gatt.org, wondered if Bonanno and Bichlbaum might throw the same kind of satirical mud on at the Global Agreement on Tariffs and Trade, institutional precursor to the World Trade Organization. What better way to piss in the WTO’s eye (if, like our two heroes, you couldn’t make it to 1999’s Battle of Seattle) than a satirical website poking fun at everything these real-life Evil Capitalists propagate? It probably would’ve stopped right there…if not for those blessedly idiotic people who don’t bother to read the websites they Google. Occasionally, one of those useful idiots would stumble upon gatt.org and send in an esoteric question on tariffs…or trade…or an invitation to speak on the WTO’s behalf. END_OF_DOCUMENT_TOKEN_TO_BE_REPLACED