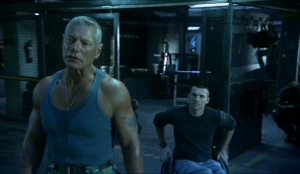 (Answer: a man who gets his Great Ideas from the Governator.) And who follows that with Romeo and Juliet at Sea? With Titanic, Cameron threw all pretense of originality over the side along with Leonardo. And bless his heart for sending the foppish pretty boy to a well-deserved watery grave. But Titanic also proved Cameron’s real talents lay in fields having nothing at all to do with making good films. The man is first and foremost a technician. Give him a some hardware and a chunk of time and he’ll go Rain Man on that shit…but God help you if you’re a flesh and blood human being. Bless Linda Hamilton for dropping the man faster than a hot rock from the Temple of Doom. Bless her also for warning us all about what he was and where he was going. And curse everyone else for not paying attention. Titanic also taught him that America’s film critic community is so coddled and concentrated on writing proper ad copy that they’ll let any half-hearted, hackneyed sci-fi flick slide, so long as you make it pretty. END_OF_DOCUMENT_TOKEN_TO_BE_REPLACED