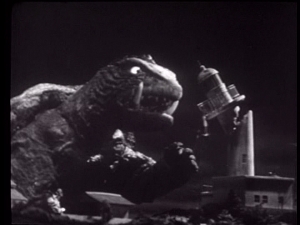 And speaking of destruction…it’s 1965 again, and despite rising tensions between the Superpowers, someone’s still managed to scare up the funding for an Arctic expedition (chasing  that fabled Northwest Passage, no less). As the film opens, the expedition’s official zoologist, Dr. Hidaka (Eiji Funakoshi), his typically hot assistant, Kyoke (Harumi Kiritachi), and your standard news hound, Aoyagi (Junichiro Yamashiko), stop by an Eskimo hut to warm up and quiz the natives. A formation of toy planes interrupts their welcome. “Russian planes,” Hidaka says. END_OF_DOCUMENT_TOKEN_TO_BE_REPLACED