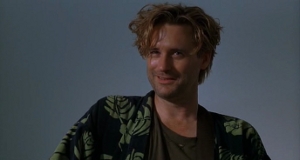 On the surface, Zero Effect appears to be a honest attempt by writer/director Jake Kasdan to bring the classical detective story forward, into the modern world (circa 1998). Obviously, certain conventions of nineteenth century detective fiction had to go away. Others required radical alteration. But take heart: the same dime-store morality that rule the best (and worst) of those nineteenth century tales is still in force here, though good Victorians would hardly recognize it, dressed in its late-twentieth century ambivalence. The film almost succeeds, fumbling only because it feels it must fulfill the expectations of its small-but-vocal audience, rather than fulfilling its own inherent promise.

Depending on how you look at things mysteries have either decayed as a genre or triumphed beyond all expectations. Only Romance enjoys broader social saturation. What’s a story without a Problem for a protagonist to Resolve? And what’s a story without a Love Interest to spice things up and lure women into theaters? So goes the logic of Hollywood marketers and the artists who labor under them, forced to dress even their best ideas in these tried n’ true tropes, the better to “market” them. END_OF_DOCUMENT_TOKEN_TO_BE_REPLACED