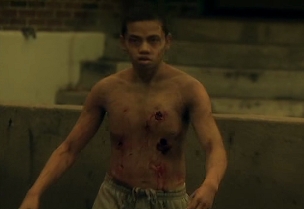 I don’t know whether Diary of the Dead was an honestly-bungled attempt to move the zombie movie forward as a format…or a flagrantly half-assed attempt to make up for Land of the Dead. I can’t see George Romaro’s heart. Anything is possible. Making a decent zombie flick only seems an impossible task thanks to my relative inexperience. Dawn of the Dead was the last great hope and that was 1978. The wave crested, and it’s been rolling back ever since we left that mall. Why can no one admit that mall was the last good idea George Romaro had? Why must we have Diary of the Dead?

Framed as a documentary-within-a-movie titled The Death of Death (“a film by Jason Creed”), Diary is, as far as I’m concerned, exactly the type of film George would’ve made had he put together a Dead movie in the 1990s (rather than bang his head against the intractable wall of stupidity that Resident Evil eventually became). Full of young, pretty people who’ve never seen zombie movies before, Diary ends up being much less than we’ve come to expect from ol’ George. END_OF_DOCUMENT_TOKEN_TO_BE_REPLACED