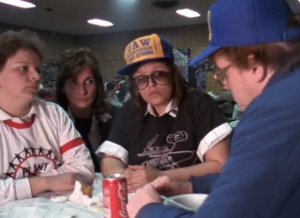 On September 16, 1908, philanthropist William Durant opened the first General Motors plant in Flint, Michigan. With seventy-two years experience in ol’ fashioned, American car making, the company realized record- breaking profits in the the 1980s. It did this, in part, by closing eleven plants in Flint, leaving thirty thousand factory workers suddenly unemployed. The company considered this savings on labor-cost a profit, but it became death blow to the city of Flint, which entered a financial nosedive which it has not climbed out of to date. All attempts to revive the area have failed miserably. Today, Flint is as much an urban wasteland as anything this side of Detroit, South Africa, or Afghanistan. If you’d like a sneak peak at America’s future, hop a flight to Michigan…and bring some spare change for the guy standing on the highway with a cardboard sign. WILL WORK FOR FOOD. END_OF_DOCUMENT_TOKEN_TO_BE_REPLACED