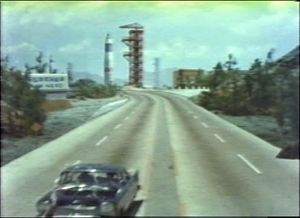 We open at a wedding as the bride and groom depart in their shark-faced car, a gleaming phallic rocket wishing them well from the background. Must be the late-1960s, and this must be Korea’s answer to Godzilla and Gamera‘s breakaway success. This is Yongary, a Sino-Korean co-production conceived with the land beyond the sea (the East Sea, that is) firmly in mind. Thus Yongary‘s many, many problems. All of which are accentuated by a horrible dubbing job and an injudicious use of TV aspect ratios.

For now, let’s examine the families. Yongary leaves us no choice, unceremoniously dumping its audience into their after-wedding gossip session. Recounting the catty babble would be tedious, so I’ll give you the gist. We’re to understand the Happy Couple are On-na and a character I labeled Major Tom (since, in the English dub, we never learn his name). Major Tom’s friend, Ilo (present at the wedding) immediately reveals himself to be a Korean Jeff Goldblum figure twenty years ahead of his time: the dedicated-but-socially-inept Scientist who’s dating On-na’s sister, Su-na. Su-na, we soon learn, is in no hurry to marry our Scientist. Falling in love with him would apparently “be like falling in love with a computer, almost.” You can imagine Ilo thinking, Thanks, Su-na. For being made of Bitch. END_OF_DOCUMENT_TOKEN_TO_BE_REPLACED