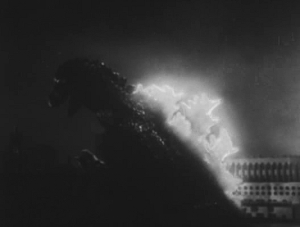 Movie producer Tomoyuki Tanaka considered all this on a plane ride home from Indonesia. His latest picture having fallen through, he flew home facing a hole in Toho Studio’s winter release schedule (which used to be what the summer schedule is today for American studios). In all likelihood, a clutch of manic bosses looking for a hit, fast, waited for him at home. The American monster picture King Kong had just enjoyed a international re-release the previous year, mulching a bumper crop of American giant monster films with all that lovely money it brought in. Including The Beast from 20,000 Fathoms, a film about a giant dinosaur awakened by fictional nuclear testing in the Arctic Circle, which eventually attacks New York City. What if, Tanaka wondered, a giant monster, awakened by the actual American nuclear tests going on in the Pacific Rim, attacked Tokyo? END_OF_DOCUMENT_TOKEN_TO_BE_REPLACED