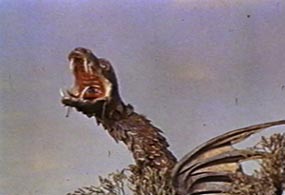 Chances are you’ve seen Reptilicus before, even if only while browsing through your satellite provider’s Guide screen. The damn thing has remained a staple on the Sci-Fi Channel, edging other, better giant monster movies right off the network after it sold out. Before that it played on countless Saturday afternoons to an audience of latch-key kids. Before that: the drive in. (You remember drive-ins, too, right?) Yet, somehow, I managed to avoid seeing Reptilicus in its entirety until just last night. Go figure. END_OF_DOCUMENT_TOKEN_TO_BE_REPLACED