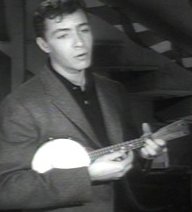 We cut to a couple parked in the middle of the tangled desert wasteland. (Not the most romantic setting in the world but what do I know? Maybe gnarled old trees are like Spanish Fly to some.) Later on, we’ll learn their names: Pat (Grady Vaughn) and Liz (Yolanda Salas). But for right now, don’t get too attached. Just as they get all close and lovey, an unseen force shoves their car over a cliff. Now, if I were one of those people who’s obsessed with finding subtext in even the most bizarre pieces of crap cinema, I’d be amazed. I’d point out that it showcases just how merciless the morality of 1950s horror pictures really was…even make the observation that, unless Liz is giving her man a nice, off-camera handjob, this couple’s only crime is snuggling. I’d then go on to note that at least 80s Slasher flicks let you have sex before you died. Let no man say our culture hasn’t moved forward. END_OF_DOCUMENT_TOKEN_TO_BE_REPLACED