These Slasher sequels are supposed to be simple. Trot out a brace of clay pigeons, watch them all die one by one, tack on some stupid cliffhanger, and you’re all good to go. It seems impossible to screw that up, but by God, Mustapha Akkad found a way. Several, in fact.

The first, Halloween 4, was a complete waste of its own potential, meant to compete with the other Big Names in this sub-genre by copying all their worst eccentricities. By 1989, the Friday the 13th and Nightmare on Elm Street films had long-since surpassed the original Halloween in the popular imagination. They (rightly or not…mostly not) were synonymous with American horror movies of the late-80s, leaving their mutual progenitor in the box office dust.

Akkad  couldn’t allow that. Nor could he allow Halloween 5 to pick up where the last left off. Sure, The Revenge begins with a re-staging of  The Return‘s final moments, but that somehow makes it worse. Unlike the mouth-breathing audiences Akkad obviously targeted, I actually remember the end of Halloween 4. I hoped it signaled a spark of creativity finally flaring up within this franchise. Nice of Halloween 5 to crush that right out of the gate. END_OF_DOCUMENT_TOKEN_TO_BE_REPLACED 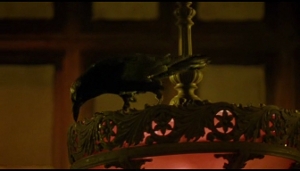 Conceived as an on-going comic book series, the first Crow film benefited from the cohesion a story must have if it’s to be a good film. Only an injection of syrupy, Hollywood sentimentality kept it from being a faithful adaption of its source, with all the problems that implies. Problems of nihilism, transcendental melodrama, and a worshipful respect for death that’s almost Mesoamerican. Problems that provide fertile ground for the true artists to do truly artistic things with J. O’Barr’s depressing little world. The Internet’s littered with them, and digging through the shin-level shelves of certain chain bookstores will also reward anyone in search of a good story set in this universe. You won’t find that here. But if you like gloss and hate originality; if you’re desperate to see a film the confirms all your worst expectations about what Hollywood is, and what horrible things it can do to even the best of stories…pull up a chair, brother/sister. Stay a’ while. END_OF_DOCUMENT_TOKEN_TO_BE_REPLACED 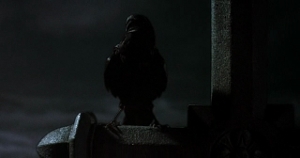 I even wrote my own piece of Crow fan fiction. And before you ask, no, you can’t look at it. It died a thankful and unceremonious death several computer crashes ago. I wrote it over the course of a month at age sixteen, the perfect time to write a violent revenge fantasy centered around the above definition of “love.” And in the course of writing it I discovered something O’Barr must’ve realized ?himself: that vengeance is not catharsis. In the end, it’s only vengeance. A ravenous, yawning beast that will not stop until its consumed everything it touches. Something this movie’s two screenwriters completely failed to realize. END_OF_DOCUMENT_TOKEN_TO_BE_REPLACED