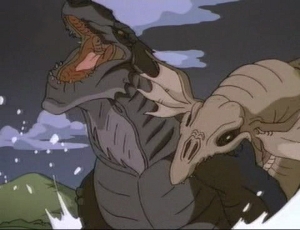 Funny how many of these episodes open up with some member of the Humanitarian Environmental Analysis Team sitting on their ass, watching television. Team lead Dr. Nick Tatopoulos has “monitor duty” this week, joined by recovering Larry Cohen fan Dr. Elsie Chapman. The two watch a video from Dr. Hugh Trevor of the Pisces Research Institute…in Loch Ness, Scotland. Per the usual cryptozoology cliches, Dr. Trevor’s only managed to catch a fleeting glimpse of Nessy after the creature’s alleged attack on the Institute.

“They should’ve hired a real actor,” Dr. Nick says. “This guy’s embarrassing.” And when a 90210 vet craps on your ability, you really should go back to drama school. “And is that thing made of…rubber?” Har-dee-flippin’ har, doc. Making things even funnier, the “actor” Dr. Nick’s critiquing is played by the realest “real” actor this series has seen so far: Roddy “Cornelius” McDowall, in (no, really) his last screen role. END_OF_DOCUMENT_TOKEN_TO_BE_REPLACED