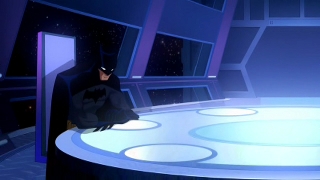 As with so much else, superheroes had a large part in popularizing what was once the esoteric pipe dream of clever sci-fi authors. The Justice League first met their “evil” dopplegangers, the Crime Syndicate of America, back in 1964. And while those original Silver Age comics have…shall we say…mellowed…in their old age, I still respect the CSA’s original motivation for jumping dimensions: sheer boredom at the ease with which they’d conquered their own world. (with the exception of one Alexander “Lex” Luthor). The Justice League cartoon series updated and expanded up this plot to great effect in its second season two-parter “A Better World.” And while this Justice League cartoon was originally meant to be a transition into the series’ third season, life, and a tight production schedule, intervened. It still works as such, but feels oddly out of place coming so far down stream, after I (for one) thought Warner’s Animation department had run this idea into the ground. END_OF_DOCUMENT_TOKEN_TO_BE_REPLACED