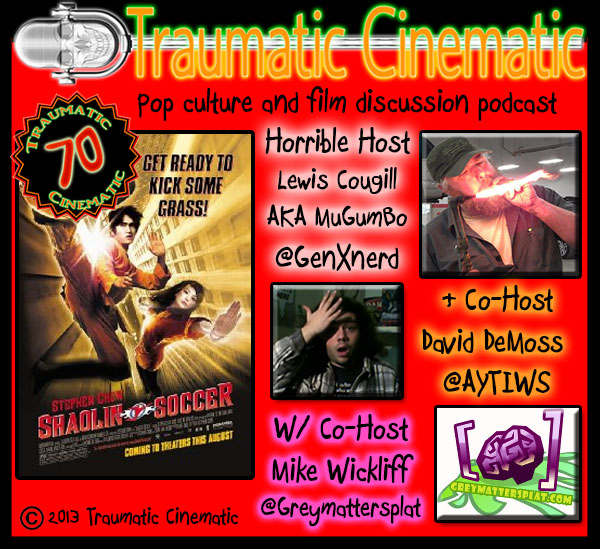 For a moment there, around 2004, everyone was talking about “Kung Fu Hustle” – the eccentric martial arts comedy from writer/directer/star Stephen Chow. If only we’d known, at the time, that Kung Fu Hustle was but the tip of an iceberg Chow, and long time comedic collaborator Ng Mang Tat, had spent years building for themselves in their home market of Hong Kong. With assistance from action choreographer Siu-Tung “Tony” Ching, Chow and Tat reunited in 2001, to combine Kung Fu movies with the inspiration sports comedies Hollywood like to crank out in the 80s and early 90s. The result of their mad experiment in genre cross-pollination  Shaolin Soccer, kicks the ass of every so-called “spoof” Hollywood’s produced in the last twelve years, combining gut-busting laughs with ball-busting action and just the littlest touch of a love story. It’s a feel-good film for all ages…but did it manage to worm its way into the Traumatic Cinematic crew’s black, chitinous hearts? Listen and find out. Unless you’re playing for Team Evil.