Ree Dolly (Jennifer Lawrence) is a seventeen-year-old native of the Missouri Ozarks. With her father missing and her mother nearly catatonic, Ree’s left to raise her two young siblings as best she can. Winter’s Bone opens with their morning routine and, as the Dolly children walk to school, we see Ree quiz her little sister. “Spell ‘house,'” she says, delivering the film’s theme with a level of stealth that would make ninja masters nod in stoic, reserved approval as they tugged at their obligatory beards.

Winter’s Bone is nothing less than cinematic ninjitsu: a film that carries out its missions  with careful patience, heart and soul. Based on the eponymous book by Ozark native Daniel Woodrell, the film is everything you’ve heard it is and more.

After the overture, Sheriff Baskin (Garrett Dillahunt) drives up to deliver the plot: Ree’s notorious, methamphetamine-manufacturing father just jumped bail. Since he put the Dolly property up for collateral, his showing up in court just became the only thing standing between Ree’s home and the bail bondsman. With no other choice, Ree journeys into the heart of rural, American darkness on a quest for her father’s current whereabouts and the nefarious circumstances behind his disappearance.

It’s a deceptively simple story that would make for a simple film if not for the dense complexity of its characters and setting. This is a world where dreams get crushed under the weight of kinship obligations and their chains of social responsibility; where paranoia, isolation, and insular xenophobia go hand in hand with affection, charity, love and (oddly enough) hope for the future. It’s a place so diametrically opposed to the prevailing currents of American culture author Woodrell had to invent a new term – “country noir” – just to describe it.

That’s as accurate a description of the film’s tone as I can find. Once I did, Winter’s Bone opened up like a bald top mountain vista. This is simultaneously a crime drama, a hero’s journey and a mystery, all balanced on the back of a young actress who perfectly captures the sense of being an unstoppable force in a world of immovable objects.

It’s exactly what you need to be a noir hero in any geographic region, and Jennifer Lawrence delivers. If she didn’t, the whole film would fall apart, since Winter’s Bone is basically ninety minutes of watching Ree talk to other characters about someone we never see (in full). Writer/director Debra Garnik aids this narrative with deft, and almost exclusive, use of handheld tracking shots. Her camera never settles; it floats around its subjects like the ghosts of Stephen King’s Maine, before settling on details that always manage to be unsettling, however benign the image.

It’s a cinematic technique I’ve come to think of as “Lynchian,” putting me in mind of that other great examination of rural American violence, Twin Peaks. I avoided comparisons between the two – and the associations such a comparison might bring up – until about an hour in, when the film left me no choice by setting its main narrative aside in favor of a quietly-apocalyptic dream sequence involving squirrels and turkey vultures.

Ree’s “real” world is a succession of rural drug dealer’s houses: dilapidated single-wides with ATVs in the front yards and horse pins out back. Hand-build, wood-frame cabins with dogs on chains, automobile graveyards, old license plates nailed to walls, flannel shirts on clotheslines – the paraphernalia of the Midwest. Each  location – each stop in Ree’s odyssey – is packed with this stuff, used to characterize the wide and varied cast Ree must associate with over the course of her quest.

In back of it all, we see skeletal trees reaching up from the dead grass to beg rain out of battleship-gray skies. It’s beautiful, and it manages to do exactly what the book did well, turning the Ozarks themselves into the film’s most-prominent a character. 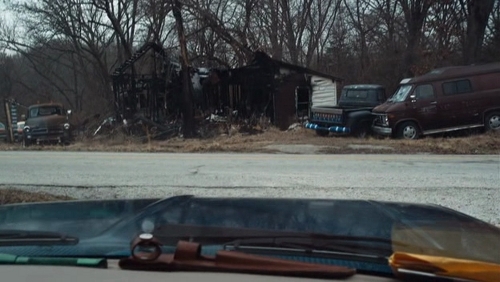 It’s a case study in how good filmmaking can wrack up the tension and suspense of a story were little to nothing actually happens onscreen. Winter’s Bone earned its R for swearing and casual drug use, but this is a film pregnant with potential violence. Ree is the humane eye in this film’s storm of implied cruelty, attempting to remain moral as she navigates her world’s maze of competing moral systems: simple survival, which moves her; familial piety, which drives her; and the code of silence common to all serious drug dealer communities, which stymies her at every turn.

It’s a mythic story once you think about. The quest for your Father and the boons he can give you to help out with the monster-killing. The Navaho call it Where the Two Came to Their Father, but Ree Dolly kicks so much ass you need one of her to get the job done properly. She’s that rarest of rare creatures: a strong, female protagonist played by a good actress in a beautifully made film.

It’s a righteous film that spreads itself across genres as easily as the mountain range that supplies its backdrops. Everything about Winter’s Bone works. I single out Lawrence only because of the heavy lifting required of her, but the entire cast is spot-on, right down to their mannerisms, ball caps and Ozark Mountain accents. Garnik and Anne Rosellini’s script preserves all the novel’s best lines while seamlessly adding necessary bits people who haven’t read it won’t notice. They grasped the essential heart of this story and their cinematography shows it. I don’t need the credits to tell me this was filmed entirely on location. It looks, sounds and feels like a picture of my old home region, and doing that is an artistic achievement worthy of my highest praise. And yours.