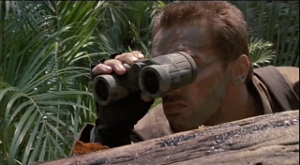 The late-80s saw the genre reach its (*ahem*) creative height. Beginning with 1985’s Rambo II, and continuing through Lethal Weapon, tonight’s subject (both 1987), and director John McTiernan’s next film, Die Hard (1988), the Action movie grew comfortable with its internal logic (or lack thereof) and began to stretch its wings out, taking on new and strange shapes its finely-trained audience hardly recognized. McTiernan himself would drag it through several of these bends, leading the genre to high highs with…well…let’s say Die Hard: With a Vengeance…and eventual suicide. (Well, what else can you call Last Action Hero?) 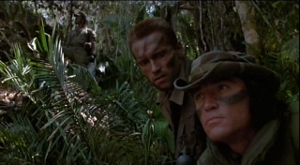 But if I were to chose the film most directly responsible for Predator‘s existence, I would chose Jim Cameron’s Aliens, released the year before. Its “Vietnam War Movie In Space” plot grafted tension and a nerdy, sci-fi atmosphere onto the standard Body-count Festival. (Typified by Ah-nuld’s previous films, Commando and Raw Deal). Having cut his teeth playing Conan and teamed up with Cameron for The Terminator, it’s no surprise the Governator jumped at this role. After all, he’s once again saddled with playing the power fantasy all good little Austrian boys dream of being: the ubermale, let loose in the jungle with a pack of other ubermales at heel. What else could you ask for?

Ah-nuld is Dutch, commander of an elite special forces “rescue team,” that arrives with the opening credits in an unnamed Central American “Republic”…that’s pretty obviously Honduras. As Dutch’s old friend, the General (R.G. Armstrong), explains, one of “our” pet “cabinet ministers” has gone and gotten himself kidnapped by “guerrillas” over the boarder (in what’s probably Nicaragua). Once the minister’s rescued, Ah-nuld’s to cede authority to his former comrade and current-CIA spook Dillon (Carl “Apollo Creed”/”Action Jackson” Weathers) and get their asses back on friendly ground. 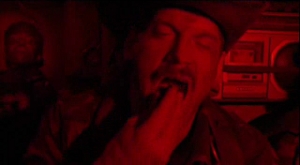 Dutch’s rescue team is a collective of Action movie (*ahem*) talent never to be equaled. Jessie “the Body” Ventura is the Vulcan Gatling gun-toting Blain. Another Commando veteran, Bill Duke, is Token Black Dude, Mac. Shane Black, writer of all four Lethal Weapons, Last Action Hero, and the greatest Action film of all time (for my money), The Long Kiss Goodnight, is Hawkins, the Token Nerd. Sonny (Firewalker) Landham is Billy, the Token Indian, employing his Native American super powers in service to the white man as team tracker. And Richard Chaves is Poncho, who…um…eventually speaks Spanish. And he was on Babylon 5…once.

Along the way to the fight scene, Our Heroes pick up the trail of “six men wearing U.S. issued Army boots,”  leading  them straight to those men’s skinned corpses. I have a soft spot for Predator thanks to this shot, and the fact that it begins the way most Action film’s end: with a massacre of the “bad” guy’s guerrilla camp. In their own way, Ah-nuld’s company is as predatory as the alien that’s been stalking them since they landed. Explosions and gun play follow as night follows the day, with everyone important (that is, everyone on Ah-nuld’s team, the so-called “good” guys) surviving unharmed. The team even picks up a hostage and Token Woman in Anne (Elpidia Carrillo), but there are no cabinet ministers to be found. Turns out he was actually a CIA agent, probably nipping across the boarder for a shipment of cocaine or three. “[S]ome of the guys we waxed” according to Mac, were “Russian military advisers. Somethin’ pretty big was gonna happen here.”…but who cares, right? Just another Tuesday in Central America.

The real question is, can Ah-nuld and company make it to their pick-up point before they’re picked off, one by one, by the invisible alien. Its observed their handiwork with evident appreciation and spends the rest of the film teaching this bunch of Ugly Americans a thing or three about stealth. This film shares a structure with those blooming onions you find at soulless chain restaurants beside America’s highway. The initial two-thirds seem meant to evoke Platoon with Dillon as Chris Taylor, but as the film sheds characters it also sheds allusions to other, better films, becoming something all its own. Not “unique” by any means, but at least writers Jim and John Thomas at knew enough to disguise their Alien rip-off with liberal doses of machismo and technofetisism.

As characters, the rescue team are expendable redshirts, as well rounded and fully fleshed as Jim Cameron’s Space Marines. As the film’s Ripley, Schwarzenegger makes a good Commando, a slab big as life, that walks and talks like a man. Channeling Conan, he ends the film alone and lost in the jungle, using stone age tactics against his Space Age opponent, given the inadequacies of twentieth century jungle fighting. If Aliens meant itself to be a Vietnam War Movie In Space, Predator is the Vietnam War Movie for the Regan Era – crazed, killer Special Forces soldiers beset by invisible enemies. If you’d never seen this film, you’d expect these men to go through some sort of soul-searching meditation about how War is Hell and Innocence Is the First Casualty and all that good, solid, blah-dee-blah. Instead, they all die horrible, bloody deaths, their skulls, spines, and skins carted off as trophies by a creature that’s the exact antithesis of Geiger’s Xenomorph. I find this perversely subversive in an age of unapologetic military triumphalism. But maybe that’s just me. 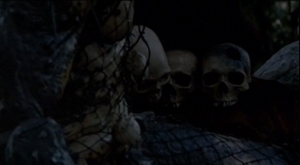 The Predator itself is the one interesting idea in this film. An alien General Zaroff with laser weapons, big ass knives, and a personal cloaking device, it seems the apotheosis of the every cliched Action movie character it kills. Any being powerful enough to hand Ah-nuld his ass in hand-to-hand combat (“That’s for Batman and Robin. This is for Junior! And this is for Terminator 3, you pig-fucker!“) wins the key to my heart. Veteran stunt player Kevin Peter Hall brings every inch of his imposing physicality (also seen in Harry and the Hendersons) to every minute of his thankfully-brief screen time. This brevity allows the Predator to stand above his post-Xenomorph brethren and achieve a real air of menace. There’s a calculating, reptilian grace to the creature that (along with its infrared POV shots) singles it out as the masterpiece of  Stan Winston special effects. Whatever Predator‘s short comings, its titular star (and most interesting character) survived as an enduring, archetypal sci-fi monster. For that, if nothing else, we owe Predator its due. 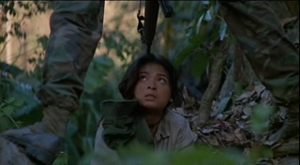 Anything else? Not really. McTiernan’s direction is suitably claustrophobic, with the jungle oozing a perverse life that slowly closes in upon Our Heroes, trapping them in a tropical killbox. Their banter in suitably macho, but it’s really up to the actors to differentiate their roles. The do well, for cannon fodder…including Ah-nuld…but not much else. Non-fans and uninitiated geeks might find themselves twiddling their thumbs for the first hour and twenty minutes, until Ah-nuld and the Predator stand alone and the real movie begins. Their duel is the real heart of this film, with each reduced to the other’s level in certain, subtle ways, betraying an intelligence behind the camera you wouldn’t expect to find given Hawkins’ groan-inducing dirty jokes…and the fact that Ah-nuld (injured and dehydrated though he might be) still manages to outruns a nuclear explosion.

A contradictory film, Predator straddles the thin red line between greatness and self-parody. There’s enough testosterone in here to bring on early menopause, so beware. For those of us smart enough to see past all of that, this film will always occupy a special place in our memories. Whether you enjoy it as mindless popcorn, a straight action/sci-fi romp, or the anti-Action film a part of me truly believes it to be, you’ve got no excuse not to have already enjoyed Predator. And pray for the next sequel: Please, Lord, don’t let it suck. It almost assuredly will.