This was one of those movies, purposely not screened for the critics in advance of its release last year. The movie industry is a vain, attention-hungry animal, and it never shies from the media spotlight without good reason. Occasionally a movie comes along so hobbled, so hackneyed, screening it for criticism becomes an open solicitation for capital-T, Trouble.

10,000 B.C. so desperately wants to join the ranks of films like One Million Years B.C. and Prehistoric Women it forgets why such movies sucked, committing many of the same mistakes. Watching it is the cinematic equivalent of sitting trapped behind two-way glass as a retarded child stumbles through a room full of open bear traps. One may shout, “No!” all one wants, to no avail. One will just loose one’s voice.

We open on the snowcapped wastes of…somewhere…sometime around 10,015 B.C. We know this because Our Hero, D’Leh, is a child (played by Jacob Renton) at this point. D’Leh’s is a supposedly-harsh world ravaged by the last Ice Age. Not that anyone in D’Leh’s tribe wears protective clothing, or displays the least bit of discomfort. Tooth decay, frostbite, and misty breath are similarly-unknown to these subarctic hunter/gatherers. It’s almost as if their mountain home were a series of carefully-constructed green-screen sets dusted with plastic packing peanut shavings blown by an oscillating fan.

The appearance of a blue-eyed girl named Evolet (Camilla Belle) turns D’Leh’s environmentally-controlled world upside down. The tribe’s Old Mother (Mona Hammond) sees danger right away–not from the girl, but from the “four legged demons” who destroyed her people. Old Mother prophesies that, within D’Leh’s lifetime, they’ll destroy his tribe as well. It’s alright, though; as prophetic Apocalypses go, at least this one has a happy ending. After the demonic destruction all will be sunny fun time for the people of the glacier, who will “never go hungry again.” I’m sure this Sunny Fun Time’s coming is contingent upon the completion, by a certain hero, of some variety of quest.

D’Leh’s father (Kristian Beazley) certainly seems to see it that way. As Keeper of the White Spear – the tribe’s resident Biggus Dickus – he quickly leaves in an understandable attempt to head off Old Mother’s disaster, leaving D’Leh to grow up branded “the son of a coward.”

Hoping to shuck this reputation, an older D’Leh (now played by the suitably-hunky Steven Strait) single-handedly kills a bull mammoth on the first annual hunt of his adulthood. Suddenly Hot Shit, D’Leh claims the White Spear and “his woman” Evolet…just in time for Old Mother’s demons – that is, horsemen – to come riding in. They kidnap Evolet, along with the bulk of D’Leh’s tribe. With his mentor Tic Tic (Cliff Curtis), rival Ka’Rin (Mo Zinal), and designated young-person Baku (Nathanael Baring) in tow, D’Leh embarks on a hard-traveling quest to rescue his bride from slavery and his tribe from starvation. On the way, Our Hero dodges giant birds, bonds with a sabertooth tiger, discovers astral navigation, and forges an inter-tribal alliance with the peoples of what’s obviously North Africa. All to oppose a tyrannical band of recently-arrived refuges from what’s obviously meant to be Atlantis. We can tell, because the Atlantians live in abject subjugation to their God-King, and seem quite happy to start afresh on African soil provided there’s enough slave labor around to build them some pyramids.

Wildly out there, 10000 B.C. fails in its attempt to tell a straight-faced, Cambellian Hero’s Journey by taking itself way too seriously…and assuming its audience is just as prehistorically ignorant as its main characters. More When Dinosaurs Ruled the Earth than Clan of the Cave Bear, 10,000 B.C.‘s director, our old friend Roland Emmerich, wastes plenty of time on sweeping helicopter shots and computer-generated extinct animals. As with Emmerich’s other post-Stargate offerings, the special effects here are both more interesting and better realized than any human character on screen. No surprise. 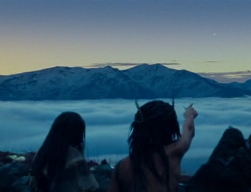 D’Leh (both the German word for “hero” spelled backwards and an example of that subtle, Emmerich touch) is first and foremost a flat, one-note sort of “held,” with conflicts so easily resolved the audience is always twelve steps ahead of him. The “star” he and Evolet follow is obviously the North one. We, the audience, could’ve identified Old Mother’s “demons” as marauding horsemen without a prophetic montage…and no matter how close the characters get to death, this bright, happy picture never allows us a moment to doubt that everything will work out in the uber-romantic end. Only the dastardly or unimportant will ever suffer the consequences of this quest. D’Leh and Evolet are well on their way to forming a modern, stone-age family when the trouble starts. Despite the Hail Mary pass of a “twist” tacked on to the end of things (ruining – for my money – the only real moment of drama in this “drama”) no one should be surprised about anything come the credits.

Apart from predictability, problems abound. Obviously, Emmerich and partner-in-crime Howard Kloser fundamentally misunderstood the whole concept of a hunter/gatherer society. If one is a hunter/gatherer, one spends most of one’s time either hunting, gathering, or following the herd-animals that are one’s primary food sources. There’d be no need to wait every year for the mammoths to arrive, no matter how pretty shots of them lumbering over the hills might look to you on a drawing board. Has our man Roland gone his whole life without seeing a single National Geographic special? I’ve been to Germany. I know they have cable.

Never one to let science stand in the way of a bad movie, here Emmerich does for anthropology what Stargate did for Egyptology and the American Godzilla movie did for biosciences. The fact that man should, by this point, still be fumbling around with cave paintings and fire doesn’t deter Emmerich from envisioning whole, tribal societies remarkably similar to the ones our civilization regularly slaughters today. In this, the filmmakers gamble that we (their audience) are the true ignorant savages, willing to pony up any spare $ on the promise of prehistoric animals and pretty, pretty pictures.

And to be fair, they are beautifully rendered prehistoric animals. Emmerich retains that special eye for striking imagery that kept us watching Independence Day, despite Will Smith’s worst efforts. This is his blessing and his curse, the triumph of style over substance most visible in the writing. No surprise it’s the writing that gets me down. Lines like, “That light is like you, in my heart. It will never go away,” are enough to convince even the most desperate wordslinger that anyone can write for Hollywood. One need only self-inflict enough blows to the head. Once one forgets little things (like the fact that elephants are matriarchal) and a few big things (like the fact that jungles and glaciers do not usually coexist within easy hiking distance) then, and only then, can one claim the white spear of American letters and see one’s name on a “blockbuster” motion picture. 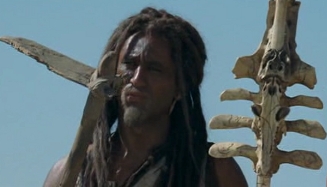 What does it say when a saber-toothed tiger stands out as a film’s most interesting character? In two scenes, s/he manages to engender hishself to the audience in a way the human characters cannot. They have a bad habit of opening their mouths and reciting the kind of lines that beg to be lost in translation. Only the fake Atlantians and prehistoric Africans use their “native” tongues, while our dirt-smudged, golden-brown hero (and everyone else in his tribe) walks around speaking perfect English. Had D’Leh and Tic-Tic confined themselves to some made-up !Kung san progenitor or another it would’ve spared us speeches that I’m sure looked good on paper. . .where they should’ve remained. In the mouths of too-handsome cave-, and bushmen (perfect teeth flashing like white strobe lights in the Serengeti sun) lines like, “You speak to the Speartooth?” become unintentional laugh riots.

The filmmaker’s disregard for history supplies plenty more laughs. I have no desire to step into the philo-historical cowpie that is the Afrocentrism “debate.” Debates are civil, and the bullshit controversy surrounding the relative blackness of ancient Egyptians looks more like a shouting match. Being half-black, I’m half-inclined to skewer this film for once again playing the Atlantis Card. Meanwhile, the three-fifths of me that claim Caucasian descent wonder after the fact that all our faux-Atlantians look Mid-Eastern. Am I supposed to be frightened? Am I supposed to despise these swarthy, veil-wearing, theocratic despots simply because they’re swarthy, veil-wearing, theocratic despots? Do you?

Serious students of our ancient ancestors need not apply, obviously. Those seeking to enjoy a rip-roaring, prehistoric good time are hereby directed to the nearest available Conan graphic or prose novel. Those seeking a type case of the next generation’s capital-B, Bad, cinema are hereby flagged down. You’ve found your exit, boys and girls. The rest of you, keep right on hiking.