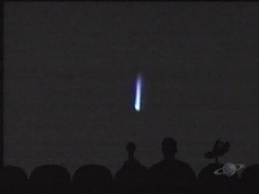 Too much rich food is bad for the diet. Too much speed is bad for the mind. Too many modern, high-fructose, Hollywood movies are bad for the movie reviewer. They encourage him to think, to wonder, just what the hell am I doing this for? That line of thought rolls right down a slippery slope, and we all know what else rolls downhill beside it.

So every once in awhile it’s good to reach back–way back for me; within living memory for most of you who walked the earth in 1975, that year of Jaws and Gerry Ford. The year director Bill Rebane (the man who brought you Monster A Go-Go) scrimped, slaved, and eventually made The Giant Spider Invasion…for $250,000.

Stare at that for a second. For $250,000, in the very summer Spielberg made “blockbuster” really mean something, you could still stage an extremely ambitious space invasion of your home town for under three hundred gs…and a lot of help from your friends…their friends…and their family members. While only one father-son team, and only one husband-and-wife team, make it in front of the camera, this picture’s crew sheet reads like the payroll of a mom ‘n pop store. I don’t mention this to romanticize; only to contrast. Because this film and its sisters in drive-in cinema are the products of a vanished world so different and distant from my own it might as well’ve been Mars.

The world Giant Spider Invasion dramatizes, on the other hand, feels right at home. To me, at least. 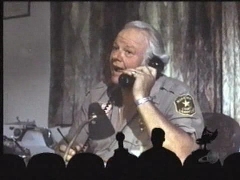 Unlike the good folks at Best Brains Inc., I am not a Minnesota Native. I am, however, a refugee from high-Midwest back country quite similar to Rebane’s Wisconsin. Plenty of crackers, rednecks, and revivalist preachers in my neck of the woods. Watching these yay-hoos stumble through a giant monster movie is, in many ways, like watching my fondest fever dream…right down to the botched day-for-night shots.

But before we get to those…The Giant Spider Invasion opens in the inanimate vastness of space, from whence a dead-white meteor rockets toward the unsuspecting Earth. Unfortunately, that meteor’s destined to fall in middle-of-nowhere Wisconsin. Like it, let us plunge into the pathetically humorous lives of our characters.

Right off the bat we meet two cards pulled straight from the Giant Monster Movie Character Tarot Deck. One, Davey Perkins, right away reveals he’ll be our Reporter for the remainder of the film by asking the Designated Authority Figure, Sheriff Jeff (Alan MF-ing Hale Jr.) if “You got any stories for the paper?”

Of course not, Sheriff The Skipper replies: “Well, I guess the biggest thing in town is that revival.” The one down the street, intercut with all that follows at odd, semi-relevant intervals. Here comes one right now: Preacherman leans over his podium and says, “I saw a star fall from heaven unto the earth. And there arose a smoke from out of the pit as from a great furnace. And out of the smoke cam locusts unto the earth, and unto them was given Power.” 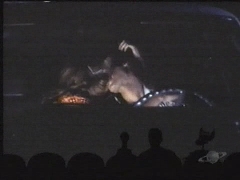 Davey could care less. Tonight’s his hot date with Terry (Diane Lee Hart). Meaning (since this is the 1970s) tonight’s the night he gets to park in the town junkyard with Terry, the movie’s designated Chick. Terry’s sister, Ev (Leslie Parrish) remains at home, while her husband Dan (Robert Easton) makes a lame excuse to get out of the house and into the embrace of his paramour, down the way.

After a disgusting bit of “comedy” involving Dan’s back brace, he returns…just in time to recite a conversation with his wife as scintillating as Calvin Coolidge. In the middle of their argument, our meteor strikes, no-doubt vaporizing generations of outhouses and latrines. A vicious wind follows the explosion, whipping up all of our main characters with no particularly regard for how far they are from each other. Only Sheriff Jeff escapes the chaos by virtue of the fact he seems to live in his office. More “comedy” ensues as we’re forced to watch Sheriff Jeff answer “humorous” phone calls relating to the explosion.

Thankfully, someone’s watching the skies. That someone being our first Scientist: Dr. Jenny Langer (Barbara Hale), an astronomer at the U of WI. “Very concerned,” she contacts wattle-chinned, sexist asshole Scientist Vance (Steve Brodie) at NASA. Quickly (though not quickly enough) they meet and greet, swapping notes on the mysterious falling object…and the radioactive crap it’s left behind. “Whatever landed,” Jenny says, “hasn’t gone away.” Cue dramatic music…assuming you (unlike Rebane) can afford to do so.

Intercutting continues as, the threads established, our characters follow them to their mutual (we hope) doom. Dan and Ev find nothing in their sojourn through the back-forty…until Ev literally stumbles across their cattle’s flesh-stripped skeletons. Stymied with lab work, Drs. Vance and Jenny decide to call on Sheriff Skipper (“our jolly red giant,” Jenny calls him). Stymied with bone-finding, Dan and Ev decide to cart home the strange rocks they keep finding all over the place. Splitting one with a chisel, Dan frees what appears to be a wealth of shinny diamonds…and one spider, who escapes unnoticed. 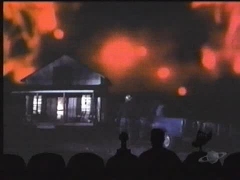 Meanwhile, four-fifths of the full Tarot Deck arrays itself in the local bar, our Scientists uniting with Sheriff Skipper and Davey the Reporter. Everybody learns everything everybody else (including the audience) already knows…but is it already too late? Back at the homestead, Ev continues pounding the sauce in a vain attempt to cope with the growing menace of spiders. “Big ones with hairy legs.” Dan, being an ass, dismisses her rantings, his mind full of diamonds. The flesh-stripped human body he finds while prospecting out back does little to drive them from his mind.

“You look like you could use a drink,” Ev says when he returns. (So much of this movie involves Dan’s comings and goings, it’s really unbelievable.) Refusing to call the Sheriff, he leaves again in huff…but not before Ev drinks down the bloody marry in her hand, made with the blended bits of a…well, you get the picture.

Except you don’t. The Giant Spider Invasions is one of those films so spectacularly bad it must be seen to be believed. “And every creeping thing that creepith upon the earth, shall be an abomination,” Preacherman tells us. This film is certainly that. Plagued by disasters throughout its production, the movie suffered multiple re-writes by at least its two credited screenwriters. I’d be surprise if Rebane didn’t take a crack or two at it, as well. The result is an uneven mixture of low-budget horror and tall tale humor, the two elements being not at all complementary.

The usual complaints apply. Giant Spider Invasion comes complete with a sloooowwwww intro and unbelievable set-ups. Then there are the characters, most of them so unlikeable in one way or another I wind up rooting for the spiders…who stage a very low-key invasion, all things (like the budget) considered. The giant spider promised by the title don’t show up until well into the third act, leaving us to deal with the script’s lame, Laurel and Hardy excuse for humor. 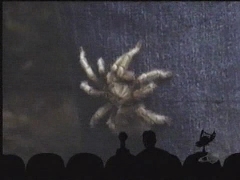 Example: Dr. Vance’s repellent sexism. He spends five minutes “humorously” mistaking Dr. Jenny for a lab assistant or a secretary or whatever the hell else he thinks she is…anything but an accredited scientist. As he asks after Dr. Jenny’s father-husband-brother we can almost see him frantically searching for some explanation other than the blithering obvious. Unthinkable that he might face a bona fide Woman of Science…or maybe it would’ve been back in the 1950s, when jokes like this were already old and (at the very least) better handled. (A similar scene from Them pops right into my head without any apparent effort.)

Then there are our rednecks, Dan and Ev. Hard-drinking, long-john wearing, spouse-cheating bastards that they are, it’s incredible thinking they inhabit the same planet (to say nothing of the same movie) as the rest of our characters. With no obvious place in the Tarot deck it’s easy to mark them as designated victims. Ev, for one, figuratively screams victimhood from her first appearance (when she immediately endears herself to us by making a pass at Davey, even as he waits to take her sister out on their parking date), saving any literal screams for later, when no one’s around to hear. 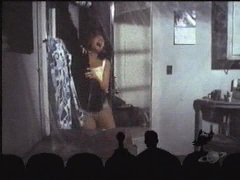 There’s an other hand to all this and here it is: you just don’t see many half-naked women fleeing from spider puppets these days; it’s all about the fully-clothed running from computer generated images. Despite their puppethood, the spider’s rack up a considerable body count thanks to trap-laying and off-screen teleportation skills that predate the Slasher Movie, and its magical villain. Unfortunately, the spiders, being obvious puppets (or tarantulas wrangled by off-screen blow driers) never establish themselves as a credible threat, since most of the unintentional laughter flows from their interactions with the cast. This combines with the spider’s unmentioned psychic powers (the power to make scantily-clad women grab their legs and hold them to their chests, an ability common to low-budged monsters) to hurt the movie thematically, even as it renders everything after the one hour mark bloody hilarious. Where else are you going to see a VW Bug, outfitted with spider legs, attack a Little League game? Or a teenager in bikini panties? The novelty alone, I swear…

In the end, mayhem and chaos ensue…in a pastoral, rural, north-midwestern sort of way, about as far from downtown Tokyo as you can get. Yet this is recognizably a giant monster film, and disserves a place as such. Soon our Scientists track the spider (now appropriately Giant) as it makes its slow, plodding way into the nearest town fair (hence the Little League game mentioned above). Danny the Reporter ends up taking it to the spider with a high power rifle (which comes standard with any car sold in the Midwest, don’t cha know?), fighting for Terry’s life. Soon the entire town deploys in lynch mob formation against the Spider, Sheriff Alan Hale’s pleas not withstanding. Our Scientists concoct a horrendously bad hypothesis to explain the spider’s existence (involving parallel dimensions and miniature black holes) and deploy even worse pseudo-science in the course of arranging its defeat. I won’t even try to transcribe some of the cringe-inducing things they say to each other while brainstorming about. Enough to say the entire movie falls apart under the smallest amount of logic. (Example: Sheriff Hale shouldn’t have to call the National Guard…you’re telling me no one at NORAD saw that meteor come down? Puh-leeze.) 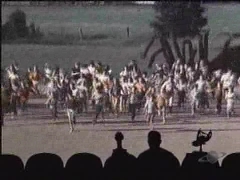 Still, the spoiled child part of my brain (that will forever be ten years old) can’t help but wonder, Have they remade this piece of shit yet? What would it look like today? Low and behold I see 2002’s Eight Legged Freaks staring…David Arquette…no wonder I’ve ignored it. Give me an unknown in bikini-panties over him any day. And give me a movie like this–an honest-to-God piece of crap–over a million corporate-funded, Sony-approved, focus-group-tested, special effects extravaganzas, each one with a heart full of sand and ashes, empty as the Great Salt Flats. At least human beings still made movies in the 70s. And there is something decidedly human going on here, simultaneously enhanced and reduced by the movie’s outward flaws.

Their name is Legion, and that’s part of the fun. Watching these things is supposed to be fun, and it matters not where the fun comes because of the film, or at its expense. Take it as the latter go have yourself some fun with The Giant Spider Invasion. Odds are you’ll have oodles more than the people who made this film.