Billing itself as, “A romantic comedy. With zombies,” Shaun of the Dead presents a fascinating case study in modern horror. Not that it’s any particularly hot shit…but what is these days, eh? It certainly is not an original masterpiece of independent film making…except for those times when it is. It is miles above the Dick and Fart Extravaganza that passes for mainstream comedy in these dark days. But perhaps I am a little biased in this. The most prevalent form of humor in the film is nerd humor, aimed specifically at me, and that goes a long damn way toward buttering me up.

I’ll explain, as usual, by way of a spoilerific plot summary. You see, Shaun (Simon Pegg, or “co-writer Simon Pegg” as everyone seems to write)  is an appliance store salesman by day (described as a “slacker” on back of the the box because God forbid a 29 year-old hold down a wage slave’s job without being deficient in the “get-up-and-go” department…he must be one of those unfortunate multitudes who “forgot” to go to business school in 1990s). He lives in London with his flatmates by night, and drinks, like any good member of the working class. His life may not be all that and a plate of fish n’ chips…but at least he’s got the hot girlfriend in Liz (Kate Ashfield).

Liz, however, possesses a bit more romance in her soul than the sweet-but-unreliable Shaun. She wants a bit more out of life than sitting around Shaun’s watering hole, the Winchester pub. “If I don’t do something,” she says, about twenty minutes on, “I’m gonna end up like those other sad fucks, staring into a glass wondering where my life went.” What “something” could Liz be mulling over? Dumping Shaun, of course, after he once again fails to follow through on his promise of a nice night out. (Proceeding to fuck it all up by giving Liz a bouquet of flowers meant for his mum. Dumbass.) What’s a nice, forgetful guy to do but…drink more? Obviously. And not notice the shambling moaners suddenly cropping up all over town. They’re just drunks, or “druggies,” or friendly, neighborhood crackheads. Nothing to go on about. Certainly no connection between those monsters and the giant troop transports we see rolling down the street… 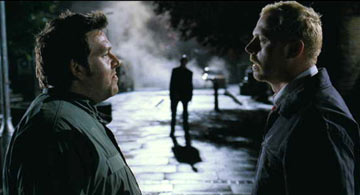 The morning after, Shaun’s hung over. He goes about his morning routine (and what a sweet one it is…how much do appliance store salesmen make in London, for Christsake? ) unmindful of the reanimated, flesh-eating undead…until one, and then two, stumble into his back yard (that’s “garden” in English). There begins the fun. And it’s only the twenty-minute mark at that. Fuck-a-doodle-do, as the characters (and now I, thanks Simon) say. I swear (because it’s fun, and) to emphasize the brisk pace of the film as a whole. Roger Ebert and I haven’t agreed on much in a long time, but we’re as one in the opinion that most zombie flicks are pretty boring. Why do you think I’ve yet to join Nathan in the sheer insanity that is Month of the Living Dead™? My flatmate would surely hate my guts ‘round Columbus Day. I’d never make it out of the month alive, and where would that leave you, beleaguered constant reader?

(In Nathan’s, Chad’s, James’, Monsterhunter’s or T. Gorilla’s capable hands, that’s where. But, never mind that.)

Point is, I’ve lost the staying power I once had (when it comes to reviewing bad movies, ya perverts). Got to get back to my fighting weight before I attempt anything suicidal like that. Shaun of the Dead is a step in that training regimen, and an important reminder that everyone, everywhere, should be ready at all times with a fully stocked-up Zombie Preparedness Kit.

In this you will need: one gallon bottled water per person, per day; 2000 calories of non-perishable food per person, per day; vitamins; potassium-iodine (in case someone, somewhere, decides to push The Button); a gun with at least some spare ammunition, please; painkillers; and for the gentleman (or ladies…really, let’s be honest) pornography. You must plan your evacuation routes ahead of schedule…and for God sakes try to have some situational awareness.

Matter of fact, that’s one of the interesting things Shaun brings up: in our modern, soul-crushing world, it’s depressingly easy for the dead to walk about without the living even noticing…until its too late, natch. The initial twenty minutes of movie are peppered with signs of impending zombie apocalypse. From the news broadcast playing on the radio to the ever-increasing scream of distant sirens. I might call the filmmakers out for their telegraphing…if it weren’t so obviously intentional…and a source of great humor as all of it rushes right over Shaun’s head. Only the horror (the horror) of his relationship’s end shocks him out of his zombified state…and then what does he go and do? Drink.

I like Shaun. He’s a mate, you know? None of that Ash-ian misogynistic insanity for him. He keeps a cool, level head in the face of the living dead, immediately coming up with a plan to rescue is mum, step-dad, and ex-girlfriend. It all goes balls-up, but you already knew that didn’t you? Because doesn’t it always? Don’t the characters in zombie pictures always wind up in some sort of siege? Isn’t there always some power struggle inside the ensuing microcosm of humanity? And doesn’t everyone, eventually, die anyway?

I’m not telling. Because the real point is, Shaun’s just a guy. A plain, ordinary bloke with no more idea of what to do than anyone else faced with a zombie apocalypse. He’s no Rambo, no Ah-nuld…hell, he ain’t even a Tom Hanks, and that’s refreshing nowadays. That’s where the movie really sparkles, both in Pegg’s portrayal of Shaun and in the writing that animates him. I haven’t seen a “slacker” hero so well realized in a long time. The same goes for a decent zombie movie. Shaun of the Dead provides both and that’s a godsend to me in this time of darkness. I’d given up all hope some months ago. Should’ve heeded the Head.

But never mind (again); we were talking about interesting ideas this movie brings up. Got the “zombies-invisible-in-modern-life” motif. Ditto the “flawed-hero-who-(for once)-isn’t -insane.” Both are concepts that deserve further exploration, possibly in a more…shall we say, “serious” (?)…group of filmmakers. Not to say that zombie pictures shouldn’t be funny. Or that comedies shouldn’t contain zombies. I dare say we’d all be better off if some enterprising member of the “mobile deceased” took a chunk out of Hugh Grant’s head. And, oh, if only they’d eaten Mel Gibson on the set of What Women Want…we’d all be in a better place. (Mel, obviously, excepted.)

What I am saying forms the basis for my one and only real gripe with Shaun. After all, the mix is off. The comedy and horror are kept too far apart for my cynical, callous taste. Anyone who’s charted the evolution of the Evil Dead series can tell you it’s far too easy for a movie to swing one way or the other. Even Sam Raimi, the master himself, could only pull the hat trick once. The original was horrifying in its stark portrayal of a zombie apocalypse. Not a laugh to be found, unless you get your jollies from tree-rape. Army of Darkness was…Army of Darkness, with all the mixed blessings that entails. Only the “sequel-that-wasn’t-a-sequel” mastered the dangerous dance between the absurd and the outright horrific.

Shaun aims for Dead By Dawn territory and misses its mark only thanks to a lack of juxtaposition. Think about it: the high-highs of laughter only make the long fall into absolute horror that much longer. I’m thinking of two trend-setting examples (which you’re free to refute): Buffy the series, and Scream. It’s the same principal that underlies surrealism; the ordinary and the mind-fucking combine to freak you out through the sharing of mutual space. It’s a kind of holistic horror, at once dissociative and engaging. Because these movies are already so absurd anyway…a fact that today’s filmmakers consciously recognize, enhancing their appeal. When they’re not destroying modern civilization, that is.

For what is this movie, really, if not a ninety-nine minute inside joke? No surprise it went right over Ebert’s head. I got it head-on and frankly it scares me. As a child of the 80s, I’ve matured inside this great, self-devouring machine we so blithely call American culture. Expanding smorgasbords of media have led to a vast array of overspecialization among the general population. Gone are the days when a traveling minstrel can hold every song anyone ever knew inside his head. Try that today and you’ll die well before you even get to the Blues. With so much out there, we the people (excuse me, the “media consumers”) are forced to pick and chose. We have no choice. The pace of modern life dictates this overspecialization, which manifest itself in the formation of what we (once again, blithely) call “fan cultures.”

I type the world “culture” and think of a Petri dish sitting on a table somewhere. Some…thing…swarming over the piece of gray flesh inside the dish. I lean over, peer in and see the something is actually millions of somethings; a coagulated mass of organisms, falling over each other for food. That’s me. You. All of us. We’re the bacteria, growing fat in our chairs as we watch zombie after shambling zombie take a bite of out life.

Too depressing? Okay, think of The Tick. No, not that live action farce, I mean the cartoon. Real Tick, if it does ya fine. Think of the piece of reconstituted tissue Dinosaur Neil kept in that solution of asscetacalicilic acid. If the above made any sense to you at all, you’ve just illustrated my point. Thank you.

Why should this mean it’s the End of Civilization? Well, think about it: As our culture becomes obsessed with trivia our culture becomes trivia. It is thus rendered trivial, dooming us all to an increasing spiral of empty, meaningless fads. Kinda like now. Only forever.

Too serious? Too apocalyptic? Well, too bad on you, bub. What’s a movie review, anyway, without the rambling sociological analysis? Besides, keep still, boy. No need for static. Not when we’ve got movies to watch. Shaun of the Dead will do you a good turn. You’ve probably seen it already. But on the infinitesimal chance that you haven’t, do. I spent thirty minutes in that Blockbuster and believe me there was nothing else worthwhile out there.

As if there ever was.