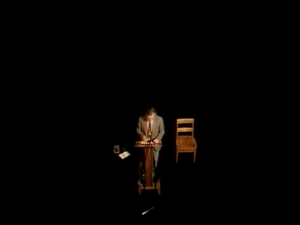 For those who don’t know (I was once one myself), Professor Chomsky is one of the most respected linguists in the world. When my mother went back to get her Masters in English, or her certificate to teach English-as-a-Second Language, her coursework amounted to a whole hell of a lot of pouring over various Chomsky’s work. The Professor teaches at MIT, writes shelf-fulls of books, and has appeared on numerous TV shows, mostly in other countries. Thanks to his old-school, anarcho-syndicalist views on the Ideal Society, and his scalding, unrepentant criticisms of America’s most-imperial foreign policy ambitions, he remains largely unknown to the general public, even unto today. 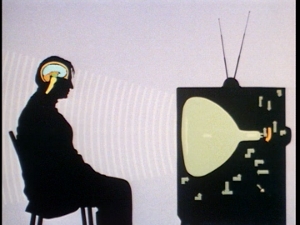 Irony is Manufacturing Consent focuses on U.S. domestic policy, principally the policies of our ruling class and the systems they’ve constructed to limit access to information. Over the course of the film, Chomsky lays out the cornerstones of his 1988 eponymous tome: that the vast majority of Americans are, in fact, toiling under a system of institutionalized propaganda. That such propaganda may, in fact, be inseparable from what we so blithely call “mass democracy.” That, through the media (which are, after all, just corporations, owned by the same small community of super-rich, white assholes that fund, manage, and dictate our political system), the elite of this country are, in effect, brainwashing the rest of us into going along with whatever policy suits their interests, be it foreign or domestic. They rely on our ignorance, and the lassitude and laziness generated by a lifetime on the giant hamster wheels we call “jobs,” to get away with murder. Literally, in many cases.

We’re not talking Manchurian Candidate here. This is no “conspiracy theory.” Instead, Chomsky offers what he calls “institutional analysis,” exactly the type of phrase you’d expect at a buttoned-down, Ivy League professor describing how thoroughly we’ve all been fucked in his imminently-reasonable teacher’s voice. Unlike many a career academic, Chomsky never talks down to his interviewers or audiences, showing a complete willingness to say the same things over and over again until it sinks through the brainwashing. “I would suggest,” he says, “particularly, to look the evidence that’s accumulated about the way the major media – the agenda-setting media – I mean the national press, the television, and so on – the way that they shape and control the kinds of opinions that appear, the kinds of information that appear, the kinds of sources they go to, and so on.” 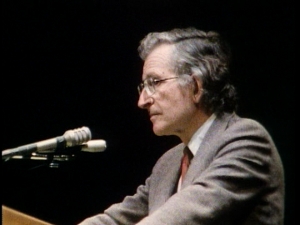 At the same time, Chomsky shows a refreshingly-pathological aversion to the views he considers immoral or unjustifiable. Often, these views also happen to be the accepted party lines of the United States and its handpicked cheerleading squad of corporate media pundits. As a linguist, Chomsky (via archive footage) often catches many a pundit on the meaning of their words. He also has the annoying habit of asking about the myriad things the mainstream press often overlooks. Why is this story being ignored? Why is this option automatically ruled invalid? Why are these important questions being dismissed? And who benefits from that silence?

It doesn’t take a rocket scientist to answer these questions. In fact, anyone but a rocket scientist should be capable of taking a good look around the prison we’re all in. It’s easy to see who has all the guns, keys, and steel batons. Talking that isn’t popular, and maybe you’ll hate Manufacturing Consent…but the real point of is, you have to make up your own damn mind. Like any good Matrix, you have to see it for yourself.

So go look up the English Civil War, which Chomsky identifies as the origin of modern democracy. Go look up Walter Lipman, and consider how the rulers of this world have embraced the views of “modern” democracy Lipman championed. “Now,” Chomsky says, “underlying these doctrines, is a certain conception of democracy: it’s a game for elites, it’s not for the ignorant masses, who have to be marginalized, diverted and controlled, of course, for their own good.” Look up John Jay’s not-famous-enough dictum that, “The people who own the country ought to govern it.” Or my personal favorite James Madison quote, straight from the Constitutional Convention:

“In England, at this day, if elections were open to all classes of people, the property of landed proprietors would be insecure…Landholders ought to have a share in the government, to support these invaluable interests and to balance and check the other. They ought to be so constituted as to protect the minority of the opulent against the majority.”

“The point,” according to Chomsky, “is, in a totalitarian state, it doesn’t much matter what people think…but when the state looses the bludgeon…you have this problem: it may make the people so curious and so arrogant that they don’t have the humility to submit to a civil rule, and therefor you have to control what people think. And the standard way to do this is to resort to what, in more honest days, used to be called ‘propaganda.’  Manufacture of consent. Creation of ‘necessary illusions.’ Various ways of marginalizing the general public or reducing them to apathy of some fashion.” 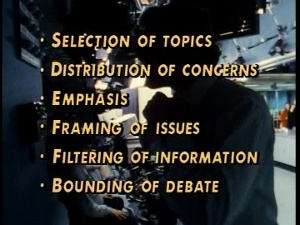 Politics aside, this movie is a well-crafted piece of documentary, yards more entertaining than whole seasons of A&E. Instead of fuzzy photos, cello music, and droning narration, the filmmakers take the novel approach of actually letting the subject speak for himself. Now, even this could get boring after two and a half hours. The filmmakers recognize this and inject a liberal amount of eye candy: period footage, newspaper clippings, interviews with contradictory pundits, and (best of all) the occasional visual aide, as when Our Directors scissor up the New York Times and divide their clippings into two collages: one of news clips, the other of advertisements. Guess which side is bigger?

In practical terms, this creates an experience akin to attending one of Chomsky’s lectures high on some mild hallucinogens. Thanks to what was certainly a painstaking editing process (undertaken by Wintonick) the entire piece not only keeps up a relentless pace of Facts, it retains a focus on the central concept of its title, no matter the diversity of illustrative examples. We move across the length and breath of Chomsky’s activist life, from his early days debating the Vietnam war with that obsequious toad, William F. Buckley…to the destruction of East Timor in the 1970s…to the creation of South American death squads in the 1980s…to the manufacture and distribution of the Gulf War to the United States in 1991…exploring the oily heart of the Exploitation System and its daily campaign to divide, conquer, and control the discourse of “democracy.”

No matter your sociopolitical leanings, no one can afford to ignore the ideas here expressed if you genuinely wish to understand the world around you. Love them or hate them, but for God’s sake, understand them. 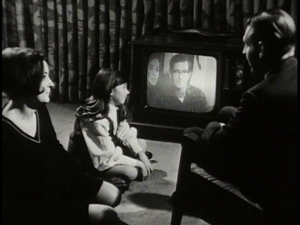 And admit it: this picture presents a dramatic (and, more importantly, thematic) picture of them, and of one man who articulates them. This is a rare case of a documentary profile done right. A less-adept pair of filmmakers could’ve easily botched the job of presenting these ideas in such a lucid manner. But these two pirate-TV veterans know their shit, and do it well, turning two hours and forty minutes of (essentially) one man talking into a real spectacle. Our Directors even deconstruct their own film to an extent, superimposing Chomsky’s talking head into various bits of archival footage: televisions, jumbotrons, “point of purchase video wall” installations inside shopping malls. These frequent, obviously artificial shots, combined with low-key original score by Carl Schultz, keep things moving briskly by keeping the audience on its visual toes. The film’s frequent changes of scenery provide an illusion of keneticism. As one of Chomsky’s interviewers tell it, this flick is “a real doozy” as much for Achbar and Wintonick’s workmanship as for their subject’s speeches.

In all honestly, I can’t pretend a lack of bias. This film inaugurated a paradigm shift in my thinking, one which continues today. Chomsky himself confirms (on the DVD’s special features) that this is a frequent experience. People apparently come up to him all the time and say exactly what I would say, were I ever to meet the man: “Until I saw this film I thought I was insane.” It’s like that in America. Stray from the company line (“America is the greatest country on earth!”) when you want to end a conversation. At worst, public vilification will chase you into obscurity, especially if your dissent comes at a time of war. (See also: Moore, Michael; Garofalo, Janeane; Penn, Sean.) Chomsky’s had a few run-ins with that himself over the years, and our filmmakers needlessly explore the controversy surrounding French Holocaust-denying “historian” Robert Faurisson. Chomsky laces the boil of fake-controversy with his usual verbal jujitsu: “If you’re in favor of free speech, you’re in favor of free speech you don’t like. Otherwise, you’re not in favor of free speech. I mean, Joseph Goebbels was in favor of free speech that he liked…” 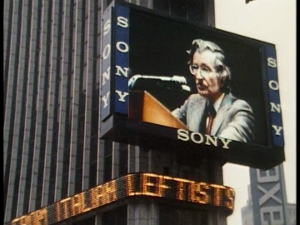 And there is hope. “The way things change is because lots of people are working all the time…building up the basis for popular movements which are going to make changes. That’s the way everything has ever happened in history…that’s the way it worked. You get a very false picture of this from the history books. In the history books there’s a couple of leaders…and I don’t want to say that those people are unimportant…Martin Luther King was certainly important, but he was not the civil rights movement. Martin Luther King can appear in the history books ’cause lots of people who’s names you will never know, and who’s names are all forgotten and who maybe got killed and so on, were working down in the South.” Despite his high position in American academia, and the often-didactic nature of his work, Chomsky is realistic enough to know, “my work…is not directed to intellectuals and politicians. It’s directed to what are called ‘ordinary people.’ And what I expect from them is, in fact, exactly what they are: that they should try to understand the world, and act in accordance with their decent impulses…in these things, I feel that I’m simply helping people develop a course of intellectual self-defense.”

Manufacturing Consent is the perfect primer for such a course. If you’re the slightest bit interested in figuring out how the world works, and your true place in it, pick up a copy for yourself and a few spares for your friends. These days, intellectual self-defense is perhaps the form of defense left to us. As Chomsky says, “The right answers are what you decide are the right answers. Maybe everything I’m telling you is wrong. Could perfectly well be. I’m not God. But that’s something for you to figure out.”

3 thoughts on “Manufacturing Consent: Noam Chomsky and the Media (1992)”