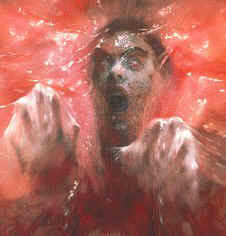 When a movie critic takes ill, coughing up and subsequent spitting out of large, globular balls of protoplasm, it’s best to avoid films centered around amorphous masses of protoplasm.

I, being me (i.e., stupid), ignored this credo and rented this: the 1988 remake of The Blob. Nothing like a horror movie to get you over a bout with the flu. Or am I the only kid who’d fake a sore throat so he could stay home to watch the one o’clock creature feature, back before the Sci-fi channel sold the fuck out?

So I rented The Blob and it is anything but appetizing. I managed to keep things under control. When there’s nothing in your stomach, logic suggests that nothing can come out, and logic prevailed. Thanks to a childhood encounter with Cronnenberg’s Fly, it takes a lot to send me to the porcelain bus. I could go into detail and have all of you bask in my gorge-holding prowess, but my mother reads this, too. And she’s already heard it.

The basic story hasn’t changed. Giant rock falls from space, deposits carnivorous alien ooze. Rustic old coot pokes ooze with a stick. Hilarity ensues. Alien ooze begins devouring residents of Small Town America and its up to a bunch of “no-good kids” to stop it before it grows too large to handle. As always, the devil’s in the details.

This time, town badboy Randall Brian Flagg (Kevin Dillon) and cheerleader Meg Penny (Shawnee Smith) are charged with stopping the malevolent muck. And while Meg still begins the movie as A Nice Small Town Girl, Brian Flagg is the kind of rebel that would make Steve McQueen mess his pants. He’s a cigarette smokin’, motorcycle riddin’, beer drinkin’, leather jacket wearin’ son of a bitch, and even though I liked Flagg well enough (I always root for the Rebel Without a Clue), I’m smart enough to recognize him for the caricature that he is. Still, he’s a fun caricature. And the script does manage to shoehorn some his softer side into the goo and gore. Occasionally. I counted four such scenes myself. Your actual mileage may vary.

With that kind of stellar characterization, it falls on Kevin Dillon to play a reluctant hero that’s both believable and likeable. He does a decent enough job, but I’ve seen people bungle this character so badly. Dillon plays the roll competently, and if that’s what you like, go ahead. He doesn’t embarrass himself, but he won’t be earning a place in the Rebellious Teenager hall of fame, either.

Shawnee Smith, on the other hand…now there’s an actress I could get into. (Wink, wink, nudge, nudge, knowwhatImean, knowwhatImean?) Here, she’s playing another great caricature of 1980s horror: the Final Girl, escaped from her Slasher origins, the traumatized heroine who  goes from cheerleader to machinegun toting Righteous Babe in under 85 minutes, a transition that would make Heather Langenkamp proud. Now, Smith is no Langenkamp, but like her costar, she’s competent enough in the Final Girl role.

That word, competent, just about describes this entire movie. It provids just enough fun to fill up your life, never rising above the sum of its parts. Co-writers Frank Darabont and Chuck Russell (who also directed things) seemed to know exactly what was needed to turn out an old fashioned B-movie…rather like The Blob. They don’t try to explore any Great Themes of Literature or examine the Heart of the Human Condition. With the exception of the Evil Government Agency sub-plot, it’s all Teenagers vs. Slime.

Evil Government Agency sub-plot, you say? Yes. Here we see the only real contrast between the two Blobs. In the 1950s, a bunch of “no-good kids” spend the entire movie trying to convince skeptical authorities of the Horror mucking around. Once everyone gets a good look at the Blob in action, the residents of Small Town American came together to defeat the alien menace with  American can-do spirit. Because if we don’t, the Commies win!

Not so here. Post-Watergate, an Evil Government Agency, headed by the shifty Dr. Meddows (Joe Seneca), descends from on high, invading Small Town America in level 5 bio-suits. They quarantining the town, touting machine guns, and aren’t the least bit shy about opening fire on United States citizens. I won’t tell you what connection they have to this incarnation of the Blob, but…you’ve probably already guessed.

The two Blobs are obvious children of their timess. In the 50s, cops and “punk kids” worked side by side and the local sheriff could get on the horn to the local military base with no problem. The institutions of authority that we, as Americans, put our faith in triumphed because, by God, they’re American institutions, and these colors don’t run!

Here, the institutions of authority we put faith in are useless in the face of an alien menace. They run around fruitlessly trying to maintain the status quo, shooting everything that looks at them funny. Don’t close those beaches. I am not a crook. We had to destroy that village in order to save it. Not at all a metaphor for current geo-political conditions. Not at all. Blah, blah, blah. In the end, this evil government agency’s efforts come to nothing, society breaks down, anarchy rules, and its up to those “no-good kids” to save the world. I don’t know about you, but that kind of story  just warms the cockles of my heart.

A few more things before I let you go. I’d just like to point out that what I said about Chuck Russell’s writing goes double for his directing. He keeps things simple and direct, with no fancy tricks or directorial eye candy to distract you from what’s on screen. Good job there.

Also, props to Lyle Conway for his excellent creature FX. Let’s face it, the old stop-motion Blob was cutting edge…for 1956. Twelve years old or not, Conway’s Blob is much more kinetic than its cinematic father, proactively chasing its prey rather than just rolling over whatever hapless human it encounters. And you gotta love those tentacles.

You don’t have to love the fistful of side characters that populate this Idyllic Small Town…but I found I couldn’t help myself. Because, while they might not be interesting, they’re at least recognizable. The shrewd dad (Meg’s father, played by (Art LaFleur), Fran (Candy Clark), who owns the local diner; even Moss the mechanic (Beau Billingslea). Like Brian the Rebel, they’re all caricatures. But through decent writing and competent acting, I enjoyed spending some time with them.

All in all, you might enjoy spending time with this movie, too. Instant classic? Hell no. Fun waste of time? Hell yes. If you want more Blob for your buck, then step right up.