The Transformers: The Movie is no place to begin your journey through the myriad maze of the  Cybertronian Wars. A link between the second and third seasons of its eponymous TV show, The Movie will leave uninitiated peoples confused, annoyed, and potentially hostile to a set of stories that continue to fascinate hardcore fans of this stupid little cartoon. The trauma it caused us and its shinning, brilliant disdain for outsiders makes this the high water mark of 1980s toy commercial animation. Screw you, the film says. This is for the fans. And if you don’t like it, just wait ’til will kill off all the main characters.

The excellent (if muddled) Transformers FAQ provides a good enough primer (pun most certainly intended) for our purposes. For those too lazy to scroll down to the appropriate section of text, we present this origin story:

Millions of years ago, the Quintessons were the heads of a huge galactic corporation. They built the planet of Cybertron as a huge factory in which to manufacture robotic slaves. There were two basic models: household and entertainment robots (“consumer goods”), and warrior/gladiator robots (“military hardware”). Whenever one of their slaves began to show signs of true intelligence, the Quintessons had them immediately smelted down to be used as raw materials for the next line of robots.

Eventually, however, more and more of the robots began to gain sapience, and they started a revolt against the Quintessons which culminated in the Quints fleeing Cybertron for their lives, and the Transformers taking control of the planet. It was sometime after this that the first hostilities arose between Autobot and Decepticon. 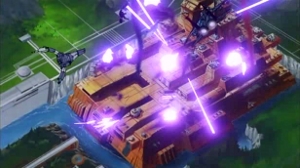 Through that greatly-loved 80s cartoon plot devise, the starship chase, a clutch of Autobots and Decepticons fell to Earth of the distant past…and reawakened in the present, bringing their war to us, with the vast energy resources of  our civilization reduced to a brass ring in this interplanetary, giant robot conflict.

By the time this film opens, it’s 2005 (!) and over twenty years since the end of Transformers Season Two. After a brief, haunting prologue set somewhere else, we catch up to the War, still perpetually in progress. The “treacherous” Decepticons have finally conquered Cybertron (somehow) but the “valiant” Autobots, led by Optimus Prime (Peter Cullen), are preparing to “retake their homeland” from hidden rebel bases on two of Cyberton’s moons and one city – Autobot City – on Earth. Being treacherous, Decepticon leader Megatron (Frank Welker) attacks and confiscates an Autobot starship en route to Earth, killing its entire crew, the better to “slip through” Autobot City’s defenses and wipe the place off the map. 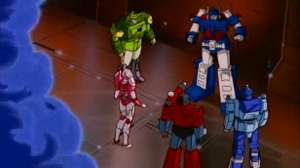 On Earth, we meet the citizens of Autobot City – all seven of them – who will be Our Heroes for the remainder of the film. So we have Hot Rod (Judd Nelson – fresh from The Breakfast Club) and Kup (Lionel Stander), the Dr. McCoy to Hot Rod’s Kirk; Arcee (Susan Blu, best known around here as Tina’s ill-fated mom in Friday the 13th Part VIII) the Autobot’s Token “Girl”; Springer (veteran bit-part voice actor Neil Ross), a rather random Autobot who shows his action movie chops by continually having to rescue Arcee; Blur (John Moschitta Jr., the “Micro Machines Guy”), another random character who adds not much to the plot; and Ultra Magnus (Robert Stack!), the local team lead. As usual, it will be up to the voice actors to differentiate each character, since screenwriter Ron Friedman can’t seem to be bothered. They’re giant robots who transform into vehicles, after all. As David Warner said in Teenage Mutant Ninja Turtles 2, “What did you expect, they’d come out quoting Macbeth?”

Well, no…but I’d expect a bit more in terms of character development. Ultra Magnus is obviously in charge around here by virtue of his superficial resemblance to Optimus Prime. But that’s all we get. Instead, the film treats us to twenty minutes of laser blasts and explosions, crack for eight-year-old boys of all ages, culminating in a final, fatal showdown between Megatron and Optimus Prime. 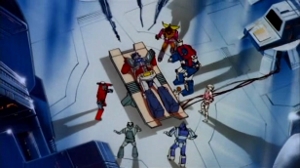 Prime’s death affected an entire generation, to the surprise of his creators, who viewed the whole thing as a marketing decision. Indeed, through adult eyes, I can see the whole thing for the shameless toy commercial it is. Characters die to satisfy the outlays of Hasbro higher ups, who looked to introduce an entire new line of toys with this film, that’s all. Those suits never considered how much drama their little gimmick would add to the Autobot’s war. Thanks to the filmmaker’s disdain for their own characters there’s a senseless brutality running under all this that’s yards away from the “happy violence” of, say, G.I. Joe. There, humans strolled casually through fields of laser fire with nary a scratch. Here, long-standing characters meet exactly the kind of meaningless, random deaths you’d expect them to meet in war…along with the occasional noble sacrifice, like Prime’s. The filmmakers never considered that they might be smacking children in face with an unpleasant truth every parent would like so much to keep from polluting their poor, “innocent” minds: that death comes for all of us…even if we’re the heroic leader of the Autobots. You can play chess with Death and maybe even cheat a few times, but Death’ll let you get away with it because his House always wins.

Megatron’s defeat sends the Decepticon off-planet with the cowardly, scheming Starscream (Chris Latta) in nominal command. They may be treacherous and evil, but at least the Decepticon’s are democratic. Back to Cybertron, they make an informed group decision to eject their “wounded” into space…including Megatron. Adrift, the injured evil mastermind begins to hear a voice from the stars…is that…Orson Welles? 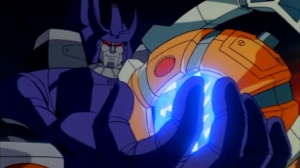 Why, yes, it is. Welles plays Unicorn, an intersteller robotic organism so large it devours whole planets for sustenance. Yet, for some reason, Unicron see’s fit to share the fact that the Autobot Matrix of Leadership (don’t ask) is “the only thing…that can stand in my way.” Drafting Megatron in service to its cause, Unicron reconstructs him into an entirely-new action-figure body, complete with new name, Galvatron (voiced by Leonard Nimoy), and sets him loose upon the universe. After killing Starscream (Primus thanks you), Galvatron returns to Earth, scattering the survivors of the Autbot City massacre across the known universe. But before they split up (the better to pad out the flick) Our Heroes receive  two doomed transmissions from the Autobot’s secret rebel moon bases: a giant planet’s appeared, basically out of nowhere (does no one have a Hubble telescope in this 2005?), and it seems hell bent on turning Cybertron (and all its moons) into light snacks. Will Our Heroes recover and  reunite to escape Galvatron, defeat Unicron, and retake their homeworld? Will be there anything left to retake?

Transformers breaks every rule of good film making, never asking or becoming anything more than two hour episode of the cartoon show. As such, this film is almost un-reviewable. I shouldn’t like it, yet I do. Often imitated, never duplicated, Transformers is more a cultural artifact than a proper film. It remains the ultimate high for a number of fans who can appreciate its metamorphic weirdness as well as a source of continuing bemusement from our loved ones and relatives. How can you actually like this crap, they ask? 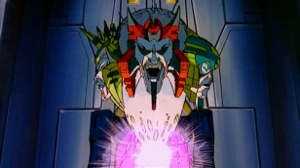 I’ll admit a deep, abiding bias for this flick. It became my entire Transformers fix once my local Fox affiliate yanked the cartoon off-air. Looking at it now, I see the the pointless fight scenes and the distracting side trips to the Planet of Junk (listen for a cameo by Python vet Eric Idle, who gets the best lines as the Junkyard Planet’s nominal ruler) and the Planet of the Quintessons for the senseless padding that they are, sure signs of creative types used to churning out 30-minute pieces and flailing about when faced with two fickin’ hours of show. (Example: after a failed attempt to blow the Autobot’s out of space, Unicron calls Galvatron all the way back to Cybertron for a dressing-down, only to send him back to the same sector of space he’s just come from…what, you could’ve chewed him out long distance and saved us all some screen time?) I’ve already mentioned the non-existent characterization, sure sign of creative types not taking their shit seriously enough for my tastes. I can almost hear some exec declare, “He’s the group’s helicopter. That’s his motivation…Hey, this isn’t rocket science, it’s selling crap toys to kids! They won’t care so long as the explosions come hot and fast.”

Well, yes, we will…Thankfully, the voice actors all handled themselves professionally. No one – not even Robert Stack – falls into the over-acting trap that yawned under most gaijin animation from the ’80s. (See the aforementioned G.I. Joe for that). Other, better writers might’ve helped them out with the characterization work, but everyone here’s game enough to bring sentience to their flat (and, occasionally, stiff) stock characters. Nelson sheds his Breakfast Club pretensions and comes across as a very clean-cut and affable sort of Young “Rebel”…though annoying Stander’s character, Kup, seems to be the extent of his “rebellion.” Nimoy growls and roars his way through Galvatron’s lines, bringing just the right tone of megalomania to a role as fraught with peril as any “menacing” cartoon villain. Series vets like Gregg (Grimlock) Berger, Latta, Cullen, and Welker (who’s such a pro he’s been in literally everything…all the way back to 1969’s  Scooby Doo, Where Are You!) all do their usual good turns in both new and old roles. If you’re willing to suspend disbelief this far you’ll have no trouble believe each to is a twenty-foot-tall, shape-shifting robot caught up in a war for their in-group’s survival. 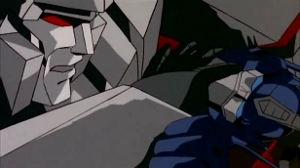 For all its faults as a film, Transformers certainly delivers impressive, brain-scarring visuals. Just be prepared.  The hair-metal soundtrack (with title theme performed by Lion, prime examples of a genre my Riot Grrl roommate famously dismissed as “butt-rock”) and fumble-fingered plotting will make or break this film in your eyes. But name another film that lets you cheer on a mechanical Tyrannosaurus. Or hear our old pal Spock promise to, “Rip open Ultra Magnus, and every other Autobot, until the Matrix has been destroyed!” Unlike some other Transformers films I could name but won’t, this film remains contemptuous of our pedestrian, movie-critic judgments and insists we sit down and enjoy ourselves and this strange fragment from our collective childhoods.