As New York City slowly but steadily recovers from the first Godzilla’s “attack” in summer, 1998, our pre-credit teaser finds an unfortunate homeless man beset by a giant, mutated rat.

Cut to…some mid-town restaurant, where Dr. Nick Tatopoulos and WIDF News Correspondent Audrey Timmonds attempt to have A Talk. You know, one of those annoying “Don’t You Think Its Time We Defined Our Relationship?” talks. Separate calls interrupt both participants before either can arrive at a conclusion, keeping the gigantic plot contrivance that is their relationship spinning for future exploitation. Because nothing says “Action-Packed Saturday Morning Cartoon” like the strained relationships of twenty-something yuppies.

Audrey and cameraman “Animal” Polatti chase down rumors of giant monsters making life hard on Bowery bums. Dr. Nick and H.E.A.T. deploy into the subway where something is literally chewing its way through Con-Ed’s best-laid pipes, plans and walls. The inevitable complaining and clowning around ensue, finally proving too much for team’s Token Badass, DGSE Agent Monique Dupre.

Topside, Monique vents her frustrations at “being the only professional on this so-called team” to Dr. Nick, who’s all-too quick to let his French Secret Service Agent go. But, “Alas, it is not your permission I require.” God damn, she’s so French I don’t care if she’s a cartoon. I’m still in love. I’d catch a grenade for Monique Dupre…but I’d much rather slip one into Randy Hernandez pocket.

Godzilla’s arrival paves over any potential team schism, once again almost crushing his nominal human companions as he climbs out of the East River. How he avoids that, or something similar (like sweeping them into the East River with the wall of water he pushes ahead of himself) is another miracle of cartoon physics. Further miracles abound as Godzilla pursues the first of the giant rats that’ll miraculously evade him throughout the episode, causing “comical” mishaps on par with old Warner Brother’s cartoons.

For example: the rat (big as a small horse) manages to sneak its way uptown, where Audrey and Animal are on location and handing out cash for monster stories. Reversing to dislodge the rat from its perch on their Ford Newsvan’s roof, they succeed in backing right up onto Godzilla’s foot. He stealthily arrived on the scene without so much as a fleeing populous proceeding him while Animal was experimenting with blind driving.

Or maybe he’s learned to teleport down there in the Godzilla Cave. For all we’ve seen, he could be down there training with Yoda. Or Bruce Lee’s ghost.

Speaking of which, the New York of this crazy parallel dimension is eerily deserted, making it that much easier for three rednecks—Bill, Dale, and Earl—to sneak into the city with their pick-up truck full of rocket launchers (helpfully labeled “Army Surplus”). Finding Godzilla in the midst of his rat-hunt, lead-redneck Dale aims to bag the Big G and succeeds only in re-destroying the Chrysler Building. As if it didn’t suffer enough during the summer of ’98. (But the Twin Towers were ones struck by lightning…)

Still, Major Hicks attempts to calm the City’s excitable Mayor (no longer named “Ebert”) with humanitarian caveats. “Our options are limited until the city is evacuated,” he says…riii-ight. I’m sure the Pentagon might have a thing or three to say about that, Major. For all their talk of “defense” and “honor,” I hear tell they’re still big on “acceptable losses.” I doubt they’d hesitate to give the green light with Godzilla on a rampage…in New York…again…Still, somehow, Hicks manages to buy H.E.A.T. the two hours necessary to track the rat to its subway home…or their subway home, as it turns out. Yes, there’s a whole colony of giant rats quietly breeding below New York’s streets…what else is new?

With the team separated by mass rat attack, it’s up to Audrey, Animal and Randy to save Nick, Monique and Team Redneck from the drooling jaws of death. Meanwhile, above ground, Godzilla fights his own, over-long battle against ever increasing numbers of rodents, human and otherwise.

All threads align in an abandoned subway platform somewhere below the city, with Godzilla literally bringing the house down wit his arrival on sight. This leaves human Heroes and Rednecks alike trapped below ground until Audrey leads Major Hicks to their burrow through the power of pseudo-science. And all without resolving a single one of the issues plaguing their relationship. Almost as if someone pressed a cosmic reset button. How convenient. The credits find Our Lovers standing alone under a New York streetlight, the way God intended sad sack New Yorker couples to look, before going off to answer two more, separate calls of duty.

What should be a rip-roaring good time of an episode instead becomes a testament to the true limits of this series, pulling its punches at every turn. Few things were harder in pre-computer animation than crowd scenes, or the kind of complex visual effects we take for granted now a’ days. This episode, then, is a relic of late twentieth-century, the Age of Pokemon, when American imaginations were not so well acquainted with images of mass death and destruction. When we worried about the effects realistic portrayals of such would have on The Children. (I might have mentioned that in the past.) The result is a—dare I say it—childish little romp that robs its audience of excitement by robbing its subject of dramatic weight. Nothings appears at stake here. So what if Nick paints nightmare word-pictures of a rodentine apocalypse? He and his little band appear to be the only people left in New York City anyway. Even without pressure from the area’s top reptilian predator, the rat’s will dissolve into cannibalism soon enough.

And as always, my questions. What keeps Audrey from cashing in on her…ahem…intimate relationship with H.E.A.T.? Nothing held her back during the movie, where she flagrantly abused Nick’s trust for the sake of her career. Should we assume her continued silence indicates growth as a character? If so, it’s made her an even less-interesting than when Maria Patillo played her. She has every right to have an official Talk with Nick about the state of their relationship.

In the Tarot deck of Giant Monster Movie Protagonists there is no Major Arcana more superfluous than The Chick. Faye Wray set the Golden Age standards for the role and  Momoko Kôchi’s Emiko Yamane was the first Chick in Godzilla history. Sixty years of actresses have attempted to flesh out the role’s barebones requirements. However, the easiest way to get around this, from a writer’s perspective, is to combine The Chick with that one other, often-superfluous Arcana, The Reporter. 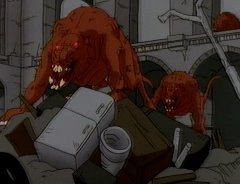 Audrey is far, far from the first Chick Reporter, but she is an uneasy, volatile mixture. Having literally no place in the show’s format or Nick’s life, her presence strikes a sour note in what was fast becoming a harmonious symphony of destruction. I am grateful that writer Steven Melching reversed the usual Disney Princess role here, with Audrey coming to Nick’s rescue (leaving Godzilla to once again do all the real work and get none of the credit). But I’m also saddened that, after this, The Series’ creators would find only one other role for her to play—the role Nick occupies for her here: the Damsel in Distress.

Monique, for all her temporary bitching, at least has skills to contribute to the team and proves herself invaluable against the rats, same as she does against every monster, every episode. She leaves things convinced H.E.A.T. is much better led than not, realizing what everyone in the audience already knows: only a sad sack like Dr. Nick could possibly control this unruly bunch of teenagers.

I very much include Godzilla in this. He comes off the worst for the whole episode, barred by children’s television censorship from actually catching his prey. Wouldn’t want an explosion of rat gore spoiling Saturday morning. I certainly hoped for it and it was sadly disappointed. My snarky comments during the synopsis should reveal my feelings as well as anything: “Cat and Mouse” is a low point early in the first season of a show obviously hobbled at the gate.

So I’m grateful we can all look forward to greener pastures and better episodes next time, when we pay a little visit to…the Leviathan…