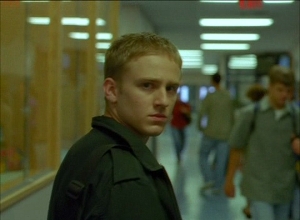 Thankfully it doesn’t take long for Bang Bang to remind me of its origins. This is, first a foremost, a Showtime Original Picture (suppress your shudders), produced in association with Viacom, the international media octopus which owns Showtime, Paramount Pictures, Comedy Central, and a whole host of other criminal corporations hell-bent on reducing all of us to uncritical “entertainment consumers.” Few things are more insulting than a film with its own Study Guide…save when that film comes to you from the director of The Babysitter (1995) and the people who own MTV. END_OF_DOCUMENT_TOKEN_TO_BE_REPLACED 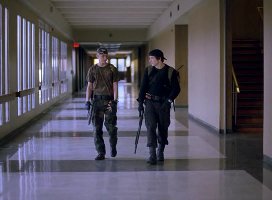 This film is, as far as I or the IMDB can tell you, the first “straight” cinematic attempt to deal with this subject by a famous (as opposed to infamous) director (we’ll discuss Uwe Boll later). Showtime’s 2002 made-for-the-network Bang Bang, You’re Dead doesn’t count for reasons a quick Google search will easily reveal. Winning a Daytime Emmy for Outstanding Children’s Special didn’t help that film out. This picture won a Palm d’Or at Cannes, of all fucking places, but don’t let that scare or surprise you. Gus Van Sant loves him some European, impressionist film, a fact that becomes self-evident as soon as the Elephant opens up. In this he shares much with the board at Cannes, and I say, Good for both of them, reinforcing each other tastes. I, on the other hand, prefer the occasional shred of meat with my potatoes. END_OF_DOCUMENT_TOKEN_TO_BE_REPLACED 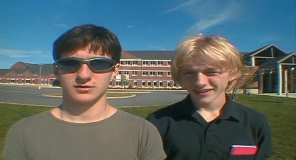 A pseudo-documentary from the first great post-Blair Witch wave, Zero Day, is another testament to the effective use of limited resources. Like a good insurgency, it turns its weaknesses into strengths, luring the viewer into a subjective, cinematic Venus flytrap with its hyper-realist atmosphere, achieved without professional actors or equipment. Coccio goes so far as to cast real teenagers and their real families, and while I’ll argue that the film is decidedly ambiguous, and take it to task for (I believe the technical term is) “pussying out,” I want to salute the film’s hypnotic effectiveness right off the bat. END_OF_DOCUMENT_TOKEN_TO_BE_REPLACED