This film is, as far as I or the IMDB can tell you, the first “straight” cinematic attempt to deal with this subject by a famous (as opposed to infamous) director (we’ll discuss Uwe Boll later). Showtime’s 2002 made-for-the-network Bang Bang, You’re Dead doesn’t count for reasons a quick Google search will easily reveal. Winning a Daytime Emmy for Outstanding Children’s Special didn’t help that film out. This picture won a Palm d’Or at Cannes, of all fucking places, but don’t let that scare or surprise you. Gus Van Sant loves him some European, impressionist film, a fact that becomes self-evident as soon as the Elephant opens up. In this he shares much with the board at Cannes, and I say, Good for both of them, reinforcing each other tastes. I, on the other hand, prefer the occasional shred of meat with my potatoes. 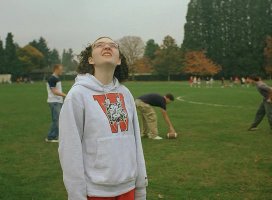 After a long, loving shot of a green-glass bottle sky, Elephant begins in earnest with John (John Robinson), a blond-headed slice of Americana, who starts his day on a harrowing ride to school with his already-drunk father. Dad’s adventures in mailbox demolition make John late for class, landing him in detention, presumably not for the first time.

Meanwhile, in Movie B, budding photographer Eli (Elias McConnell) makes his way across campus. A school shooter in his own right, Eli fills time ambushing passersby to build up his portfolio with quick snaps. The camera follows our young Peter Parker clone into the dark room. Where else? This movie dares to take you where few have gone before: into the dark process of…developing analog film! (Cue dramatic music.)

Meanwhile, in Movie C, a stereotypical jock named Nathan (Nathan Tyson) makes his way into school from (where else?) the football field, searching out and finding his love interest, Carrie (Carrie Finklea). Token shy girl Michelle (Kristen Hicks) (whom I pegged for the Final Girl–but, as Trent Reznor once sang, “That’s what I get.”) gets a warning from the gym teacher: show up in shorts like everyone else, or else, before going to work in the Library. The Gay-Straight Alliance debates whether or not one can divine another’s sexual preference at a glance, the camera rotating around their circle. (Bonus points for those of you who can tell the supposedly-gay characters from the supposedly-straight, and divine the story of their group dynamic from the half-hearted, half-haunted looks on their faces.) A trio of popular girls visits the lunch room, there to eat three bites before retiring to the restroom for some synchronized purging. True to life, this is the only thing capable of halting their constant, three-way conversation. 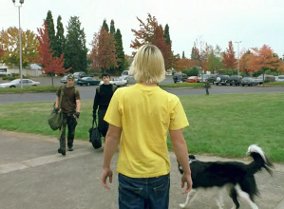 Meanwhile, back in Movie A, John sights two boys dressed in black and camo making their way across the parking lot with large, overflowing duffel bags. When questioned, the one that looks a little like John Cussack half-turns to John and says, “Just get the fuck out of here and don’t come back. Some heavy shit’s going down.”

Indeed. Just not that kind our antagonist, Alex (Alex Frost), means. The arbitrary nature of his warning, and the sheer banality of everything in the film–including Our Shooters, Alex and Eric (Eric Deulen)–reveal the two primary forces at play under Elephant‘s relatively-thin skin (thanks, World Socialists–when you’re right, you’re right). Van Sant does an excellent job juxtaposing horror with the absurd trivialities of everyday, American high school life. Indeed, these trivialities are Elephant‘s substance, or its excuse for substance. Anyone looking for a true, honest-to-god story had best keep walking. We don’t serve your kind here.

This being the same man who directed Gerry (a feel-good buddy comedy about two guys lost in the desert), Elephant’s many beautifully composed shots are no surprise. Unfortunately, most of them are long, continuous tracking moves, following each of our characters from a vantage point mighty similar to the kind found in most violent video games (mostly Tomb Raider‘s children, the so-called “third-person” shooters). This is a conscious reference, not to Grand Theft Auto, so much as English director Alan Clarke’s eponymous 1989 film, which used similar Steadicam Olympics to guide its audience through eighteen brutal IRA-related killings in Northern Ireland. Here, as there, the unbroken focus on a single subject works to maintain interest, despite occasional incidents of tedium. Alright, maybe not so occasional. 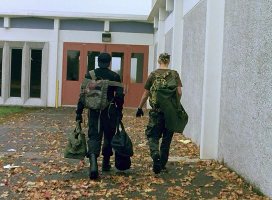 A more thorough reviewer might compare to two Elephants and tease some less-obvious through lines from both. But I’m after different game.

Unfortunately, Elephant purposefully leaves me hunting, along with all of you. Like Alien, most of its dialogue is improvised, implying another self-evident truth: most of what’s said is irrelevant. Interactions between characters are vague and archetypal. The characters themselves are self-conscious stereotypes. “I want the audience to make its own observations and draw its own conclusions,” Van Sant apparently told Roger Ebert at Cannes. “Who knows why those boys acted as they did?” Like Ben Coccio, Van Sant purposely begins his film well after that crucial moment of decision. You’d think such moments would form the lynch pin of flicks like this, but that would underestimate the shallowness of most contemporary movie makers, simultaneously overestimating their courage.

Instead of confronting these events head on, Van Sant throws an oblique pass. Despite the discordant soundtrack that follows Alex throughout the film, he and Eric are not psychopaths. Alex shares my taste in classical music, while Eric shares my taste for first-person shooters and U.S. Army Technical Manual #31-201-1. Both are stereotypes of themselves: picked-on, put-down, ignored, unsupervised, middle-class, American teenagers with an Internet connection and the nihilistic need to avenge themselves on High School in general, and theirs in particular. With guns. Including (nice one, Gus) a Bushmaster Carbon 15 Type 21 semi-automatic varmint rifle. So we know Alex, at least, has a sense of humor about all this. 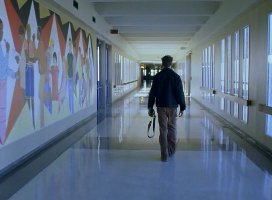 Despite that, the boys don’t really come across as a unit. They look wrong together, somehow, lacking the kind of complex interplay we saw inside Zero Day‘s Army of Two. Emenem-alike Eric (another Real Slim Shady) comes across as more sidekick than accomplice–and a trusting one at that. Who knows; maybe he was Alex’s violence coach. Once again, the real point is, Elephant‘s too chicken to ask these questions, or show us anything more than the most superficial elements of our shooter’s plots and plans. It merely presents. It asks only that we passively watch, and I’m not content with that. Nor should you be. We waste too much time as it is in this society.

Elephant asks even less of its actors, each of whom wears their stereotype well,  and props to them for it. It’s a shame they weren’t given more to do.

Shame Gus Van Sant didn’t give himself more to do, either. He seems content to present this hour and twenty minutes of subjective views on one objective event…that just happens to be a school-centric rampage. Rather than allowing us to make our own observations, the film observes all the usual causes: violent video games, Nazi documentaries, home gun-delivery services, and parents who work too much. Beethoven takes the place of Marilyn Manson, but ol’ Ludwig van was once a young radical in his time, too. Van Sant also intimates (hell, down right presents) a homosexual dimension to all this rampage killing, though I’m with Pop Matters on this: the boys aren’t gay, so much as pathetically lonely. Much like everyone else in this film. Hmm… 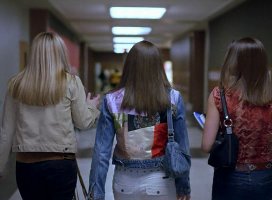 I’m not suggesting these films should get preachy–like, say, Bang, Bang, You’re Dead–only that stories should have structure, and structure without a story is just technique. A gimmick: shallow, inauthentic, and not very interesting. Greater critics than I have criticized film-in-general for offering only the superficial image of reality, its glossy surface, and Van Sant proves them right by presenting nothing but that surface. It’s ultimately vacant and dull once the sense of impending doom drains out of the film. For me, the moment came during Eli’s film-developing scene, sure to be remembered as a cinematic tour de force. One wants to scream, “Okay, Gus, I get it! No, really, I do! But I expected better, you navel-gazing bastard.”

No glot, the film said. I am forced to look elsewhere for the courage and the conviction to confront its subject head-on, rather than trail behind it like a hungry pilot fish. A good movie in search of a script, Elephant is a disappointment that will either blow you away or just blow. Depending, as always, on your subjective point of view. 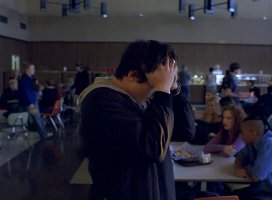